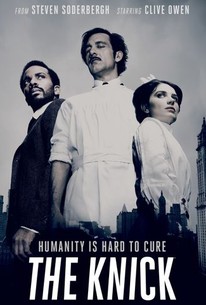 Critics Consensus: The Knick delivers an addictive second season with stunning visuals, knockout performances, and disturbing moments adding up to a period drama that's anything but dated.

Critic Consensus: The Knick delivers an addictive second season with stunning visuals, knockout performances, and disturbing moments adding up to a period drama that's anything but dated.

Season 2 of the medical drama, set in the 1900s, that charts the exploits of the staff and patients at Knickerbocker Hospital in New York City, kicks off with the facility readying for a move uptown. While Dr. Edwards (Andre Holland) makes a play to be named permanent chief of surgery, Dr. Gallinger (Eric Johnson) heads over to Cromartie Hospital in hopes of getting Dr. Thackery (Clive Owen) to come back to the Knick. However, Thackery's move to return is not exactly greeted with open arms by the board. In one of the more explosive plotlines, a subway blast sends a flood of patients to the Knick, while in the operating room, Thackery attempts to separate conjoined twins and later performs plastic surgery on Abby (Jennifer Ferrin). He also tries out a new cure in the inebriation ward, dabbles in hypnosis, pioneers a new treatment for syphilis and contemplates a new theory on addiction.

Jennifer Ferrin
as Abby
View All

News & Interviews for The Knick: Season 2

View All The Knick: Season 2 News

Ten Knots You're No Rose The Best With The Best To Get The Best Wonderful Surprises Whiplash There Are Rules Williams and Walker Not Well at All Do You Remember Moon Flower? This Is All We Are

Critic Reviews for The Knick: Season 2

"The Knick" impresses with a look, sound and feel unlike any other series on the small screen. It's a style that continues to distinguish the show in its second season.

The initial hours of The Knick Season 2 are uncommonly strong.

It's easy to treat the past as a cozy prequel to the present; The Knick treats it as a ghost story. I don't know if that makes for more honest history, but it makes for amazing television.

Much like David Milch did with Deadwood, Soderbergh proves that period television need not be mere history lesson. In so many ways, The Knick feels like one of the most vital, current shows on the air.

The Knick isn't simply a lush costume drama, a gory medical history, or a lesson in social studies. It inspires true passion.

It offers the kind of gripping trip to a time and place - New York in 1901 - that can be both stunningly beautiful and unnervingly ugly.

The Knick has maintained the level in its return. [Full Review in Spanish]

The Knick comes back for its second season bigger and better than ever, featuring several captivating storylines, outstanding production values, and a terrific ensemble, all entwined in a compelling and fascinating medical drama.

Even if you haven't seen season one, the show has enough episodic elements to dive on in with the new premiere, and if you have, you're in for an even bigger treat.

Audience Reviews for The Knick: Season 2

Discuss The Knick on our TV talk forum!