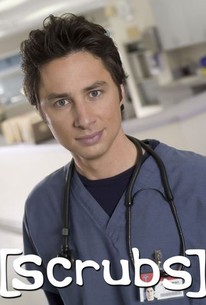 Change is in the air for the eighth season as "Scrubs" makes the move from NBC to ABC, and the characters make significant moves of their own. J.D. (Zach Braff) and Elliot (Sarah Chalke) finally become a couple again, this time with less disastrous results. Turk (Donald Faison) and Carla (Judy Reyes) prepare to become parents for the second time around. Dr. Cox (John C. McGinley) is named chief of medicine, while Dr. Kelso (Ken Jenkins) settles into retirement with less difficulty than many had expected. And, in a win for the little guys, Ted (Sam Lloyd) and the Janitor (Neil Flynn) both find love.

Barry Williams
as Himself

Carroll Spinney
as Oscar the Grouch

Caroll Spinney
as Oscar the Grouch

Scrubs is all about short bursts of out-of-body humor and very occasional dabs of poignancy.

"My Finale" made me happy. And it made me sad. Seems about right for the ending of a show that so often expertly balanced comedy and tragedy.

Scrubs certainly deserves consideration as one of this decade's finest sitcoms, a show that nimbly moved from gut-busting comedy to heart-wrenching drama to off-the-wall slapstick, often within a single episode.

Overall, this was the right ending to the show. It just came two or three seasons too late.

Has the show jumped the shark? Only a little, with a three-episode story arc that sees the arrival of stiff-acting Courteney Cox as a new chief of medicine. But later, charming and talented Elizabeth Banks returns for three episodes, so it balances out.

"Scrubs" has been a phenomenal show over its eight seasons. Not always perfect in the later years, it was still ahead of its time in many ways, particularly in terms of its excellent use of music and its rich blend of comedy and drama.

What remains great about Scrubs is its politically incorrect tone, so smooth that the offending line is already in the rear-view mirror before you have a chance to work up any outrage.

There are no featured audience reviews yet. Click the link below to see what others say about Scrubs: Season 8!