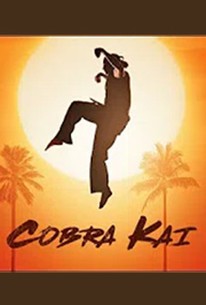 Critics Consensus: Cobra Kai continues the Karate Kid franchise with a blend of pleasantly corny nostalgia and teen angst, elevated by a cast of well-written characters.

Critic Consensus: Cobra Kai continues the Karate Kid franchise with a blend of pleasantly corny nostalgia and teen angst, elevated by a cast of well-written characters.

The arch-rivals from the legendary Karate Kid film face off 30 years later.

But if we must reboot our beloved old favorites, it's much better to see it done like this, using the passage of time as an asset and a way into a different story about the same people, than as a cheap rehash...

The series should appeal to savvy teens who delight in mildly transgressive content and to those nursing their nostalgia like Daniel and Johnny do.

This series has an underdog spirit of its own, even if it's not quite the triumphant crane kick it could be.

By focusing on one of the original movies' bad guys and the fallout from the franchise's climatic moment, this smartly written and poignant drama is a surprisingly compelling watch.

The main reason it succeeds is that all involved had a vision for why they wanted to revisit The Karate Kid more than three decades later.

As Miyagi famously taught, Cobra Kai finds a balance, and it's between nostalgia and sacrilege. [Full Review in Spanish]

You might have a good idea of how all of these pieces are going to intersect, but the real fun is in watching these characters come together in interesting ways.

This could all fall apart pretty easily... but right now I like the harsh tone and unsparing assessment of misguided men stumbling into something bigger than either of them.

I struggled with the premise of middle-aged white dudes reigniting their rivalry, but while I doubt I'll binge the first season, my interest has definitely been piqued.

If Cobra Kai shows us anything it's that just because some characters are dated, it doesn't mean that they don't still have valuable stories left to tell - and when they're this good, they should be told.

For so many reasons, I never felt that I was going to ever watch this series, let alone feel the need to review it, but did I ever eat my words when watching the first season of Cobra Kai. After the success of the original Karate Kid film, three lukewarm sequels were formed as a result of its success, and while they weren’t ever known as abominations, I never needed anything more from this franchise. When the original film was reimagined and cast Jaden Smith and Jackie Chan in the lead roles, I really had no thoughts about ever seeing the original cast members again, but once again I’ve been proven wrong. Here’s why this first season of Cobra Kai is better than anything that has come out since the original film that had any relevance to The Karate Kid. Decades later, Daniel LaRusso now owns a car company and lives a very wealthy and happy life with his wife and two children. Since his life has become that of a fairytale ending, the show is focussing far more on that of Johnny Lawrence. Fired from countless jobs and barely getting by, Lawrence finds himself reopening his old dojo in order to face his past demons. Gaining a new trainee in Miguel, this character fits the persona of Larusso from the original film pretty well, but there are definitely differences. Everyone has their share of arcs to go through from the time this show starts, until the very last shot of this season, but the most interesting character for myself was Robby Keene, played by Tanner Buchanan. This is a character that you start off hating, but then realize you may have to rethink your thoughts on the entire show after just a couple episodes. Yes, Ralph Macchio gives his all here and William Zabka impressed the hell out of me every time a comedic or dramatic moment would arise for his character, but I found myself emotionally invested in Robby the most. There are many subplots and callbacks that relate to past events, but they never feel forced. They are either done in a playful way or used as a tool to further this new story. I never once found myself annoyed when portions of the classic story were referenced. This brings me to my experience of this show in general. From the music choices to the call back with the very recognizable score, this is a show with a lot of energy when it needs to be exciting, while also being a show that displays no fear in slowing down for emotional or tender moments between characters. There were multiple occasions when it felt clear that the writers had kept a close eye on character details when weaving classic storylines into this television series. What also surprised me was the fact that footage is used from the original film every now and then in order to fill in the gaps for those who may not have seen the original movie from the 80s. In the end, Cobra Kai is a worthy successor to The Karate Kid legacy and I can’t wait to see where they go next. I hope this show is renewed because many possibilities are left wide open at the end of this season. To put it bluntly, I never expected to love a show that I thought looked absolutely atrocious from its trailers, but I honestly can’t recommend checking this out enough. Great nostalgia for people who grew up watching the original movies and also features great life lessons for young viewers who wish to start fresh with this show instead of catching up with previous installments. For everything this show sets out to accomplish, it does so in spades and always keeps you guessing. Yes, there are some very cheesy moments, but that’s also what make the original movies such a joy to watch. Aside from cringing at a few lines of dialogue, I absolutely loved watching Cobra Kai. I can’t wait for more. Now streaming on YouTube Red, this show is worth a subscription to their service alone. Definitely check this one out.

Amazing AND CANT WAIT TO OWN IT. i REALLY THOUGHT THIS WAS GOING TO BE TRASH, BUT I WAS TOTALLY WRONG. THIS IS HOW YOU BRING A 35 YEAR OLD MOVIE BACK TO LIFE AND ITS DONE THE RIGHT WAY. CANT PRAISE THIS SHOW ENOUGH.

An absolutely out-of-the-blue charmer served in easy half-hour sections. There’s something eternally touching about seeing the fresh-faced idiots of the original ‘Karate Kid’ reduced and dissipated by middle-age. Ralph Macchio does a great job as the successful family man who is suddenly neither as good nor as understanding as he thinks he is, but this is really Johnny’s show: William Zabka’s combination of humiliation, clueless machismo (What’s a face-book?) and slowly dawning awareness is the real heart of the proceedings. The magical conversion of the wicked Kobra Kai dojo from a brutal cult to a ‘Mighty Ducks’ refuge for the downtrodden is a stroke of genius. A little shining gem of a sequel cut with as much heart as irony (and wait til you see the season one cliffhanger!)