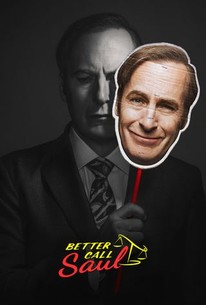 Critics Consensus: Well-crafted and compelling as ever, Better Call Saul's fourth season deftly balances the show it was and the one it will inevitably become.

Critic Consensus: Well-crafted and compelling as ever, Better Call Saul's fourth season deftly balances the show it was and the one it will inevitably become.

In "Better Call Saul's" fourth season, Chuck's death catalyzes Jimmy McGill's (Odenkirk) transformation into Saul Goodman. In the wake of his loss, Jimmy takes steps into the criminal world that will put his future as a lawyer -- and his relationship with Kim (Rhea Seehorn) -- in jeopardy. Chuck's (Michael McKean) death deeply affects former colleagues Howard (Patrick Fabian) and Kim as well, putting the two of them once again on opposite sides of a battle sparked by the Brothers McGill. Meanwhile, Mike Ehrmantraut takes a more active role as Madrigal Electromotive's newest (and most thorough) security consultant. It's a volatile time to be in Gus Fring's employ, as Hector's collapse sends shock waves throughout the Albuquerque underworld and throws the cartel into chaos -- tearing apart both Gus and Nacho's well-laid plans. While Gus changes course, Nacho finds himself in the crosshairs of deadly forces.

It's fascinating to watch all of this emotional, character-driven drama unfold against a backdrop of a battle for power in the drug trade in New Mexico... Nothing feels perfunctory or thrown away on this show, even the smallest details.

The scenes should be drab, but the work is so lovingly filmed that you come away convinced that making a Classic Roll would feel like a consummate human achievement.

The precision of Saul craftsmanship -- writing, direction, acting, and all the way down to craft services, for all I know -- makes this the best series on TV. And there really is no contest.

The transformation of Jimmy McGill's into Saul Goodman is proving to be a much more exciting journey than I ever expected. [Full Review in Spanish]

It's no longer in the shadow of Breaking Bad. Instead, Better Call Saul has taken it's rightful place as one of the best dramas on television.

If you've been a fan of Breaking Bad and found the official prequel nothing like the mother show, especially its titular character, well, things have been changing and changing fast.

Like Wile E. Coyote pursuing the Road Runner, Jimmy McGill doesn't realize he's falling from a high cliff. Unless until he looks down. [Full review in Spanish]

What an amazing show it has become. It now has a sense of self that puts it above almost everything else on television.

Why did Peter Gould and Vince Gilligan make a Breaking Bad prequel show about secondary Breaking Bad characters? Because they are really, really good at doing it.

There are no featured audience reviews yet. Click the link below to see what others say about Better Call Saul: Season 4!