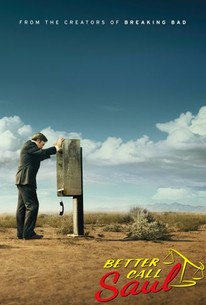 Critics Consensus: Better Call Saul is a quirky, dark character study that manages to stand on its own without being overshadowed by the series that spawned it.

Critic Consensus: Better Call Saul is a quirky, dark character study that manages to stand on its own without being overshadowed by the series that spawned it.

This crime drama series is a spin-off of "Breaking Bad" and its first season opens with Saul Goodman (Bob Odenkirk) living under a different name in Nebraska after the events of "Breaking Bad." As he watches some old ads he recorded when he worked as an attorney, he reminisces about his past. Back in 2002, Saul still goes by his name Jimmy McGill and he's a small-time lawyer; when, while preparing a scam, he angers gangster Tuco Salamanca (guest star Raymond Cruz), his life is turned upside down. He gets involved with Nacho (Michael Mando), Tuco's subordinate, he meets former cop and future partner in crime Mike Ehrmantraut (Jonathan Banks), and starts down on the path that will lead him to become Walter White's lawyer.

Better Call Saul is not only a great show in the context of the program that birthed it into existence, but would be a great show with or without Walter White.

Better Call Saul not only stands right alongside Breaking Bad as a stunningly entertaining TV series, it stands on its own.

Saul picks up plot speed rapidly at the end of the first hour. The beginning, however, is so deliberate it's almost hypnotic. It's shot out of time, and what we see falls right into the pocket for Breaking Bad fans.

The first episode is a sort of shaggy character sketch, meandering along to an abrupt, and welcome, Breaking Bad-style cliffhanger.

Gilligan has set up another dark, subversive journey and not a fan-servicing callback fest.

Gilligan and co-creator Peter Gould have improbably constructed something that feels like a continuation of its predecessor but not a retread, telling a new tale with their old show's trademark meticulousness, gravity, humor, and, beauty.

Who knew that watching the foundations of an amazing building being laid would be as pleasurable as the finished article?

Creators Gilligan and Gould have left entire swathes of people-specifically, those who don't look like them-in the dustbin of tropes and stereotypes.

Better Call Saul does a magnificent job at highlighting just how far people can-and will-go to do "right."

It's hard to imagine a Breaking Bad spin-off being able to cap the brilliance of that series. Thanks to the superb performance by Bob Odenkirk, who delves into practically every emotional state in its first season alone, it's just as good...

As a spin off from Breaking Bad, Better Call Saul has proven itself to be a worthy successor to the beloved series. Darkly comic, Better Call Saul may not always please the fans but the transition of genre may attract young bloods

Better Call Saul did the right thing as a spin-of, by establishing early on that this was its own show. The tone is different, the character are different, the motivations are different, whilst at the same time, there's a sense of familiarity thanks to the setting, cinematography and way the show is made. Frankly, 10 episodes felt like little to help the show escalate into something grand. Much like Breaking Bad, which also started very slowly, maybe we'll start to have those incredibly tense shenanigans with the cartels soon, thanks to Jimmy's big decision on the last episode. It has room to grow and interesting enough characters to back his transformation but things really need to start picking up the pace, despite being a show that makes legal talk and action more interesting than the subject has any right to.

For the die hard fans of Breaking Bad, the series ending was a crushing blow, and as is the case with the more popular series, few were happy with the way it ended. The fans wouldn't be disappointed for long however, as it was soon announced that fan favorite, Bob Odenkirk, who played shady lawyer Saul Goodman, would be getting his own spin-off and once again Vince Gilligan and the beloved genre he created lived on. Better Call Saul is not what most of us expected it to be, as we assumed, Saul wouldn't stay where he was after the events of the Breaking Bad finale, and that we'd come to see what's next, but in fact, it's just the opposite. The series begins with a depressed and sentimental Saul, taking a look back at where it all started, back when he was kind of an honest man, who kind of cared about a few people, and went by his real name, James McGill. McGill was a con-artist who was frequently bailed out by his brother (Michael McKean) who was a big time lawyer at a huge firm. It was he who convinced Jimmy to turn his life around and try to follow in his footsteps and that's what he did....kind of. Lets start with the show, because it is every bit as clever and well written as Breaking Bad was. You might not have the shocking violence, at least not yet, but as with it's predecessor, the show is always three steps ahead of you, it's clever, humorous in that dry kind of way, and it is extremely entertaining. Also similar to Breaking Bad, you have some great side characters, but one man is the show, and that man is Bob Odenkirk. If you thought he was good on Breaking Bad, you haven't seen anything yet. By the time he was Saul, he was a complete con-man, everything was a joke or a scam, but Jimmy, he hasn't really crossed that line completely, he has his moments, but he still has his humanity and compassion. That internal struggle between doing what's right and doing what he deems is necessary is at the heart of the show, and Bob Odenkirk is the heart and soul of the show. The bottom line, Better Call Saul is not on the same level as Breaking Bad...YET, but it's headed that way. What did you think of Breaking Bad after twenty episodes? Did you feel the same way as you did after sixty? That's the point, Saul is feeling his oats, building his story and his reputation. As for Vince Gilligan, he learned from his mistakes and I think people are going to catch on and get hooked a lot faster this time around. This show has the same feel to it and things are only going to get bigger and better, so if you're putting off on watching it until you start hearing more hype, that's your choice, but you're missing out on some pretty good stuff.