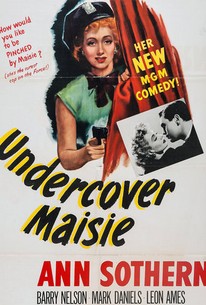 MGM's "Maisie" series came to an end with this undistinguished entry. Eschewing show business for the time being, perennially stranded showgirl Maisie Revere (Ann Sothern) decides to join the Los Angeles police force. This she does primarily to be near her latest beau, Lt. Paul Scott (Barry Nelson). After an amusingly grueling training session, our heroine goes undercover to infiltrate a gang of confidence tricksters, headed by phony swami Willis Farnes (Leon Ames). When she's found out, Maisie is taken for a one-way ride by the crooks, but Lt. Scott comes to the rescue by following a trail of clues that Maisie has cleverly left behind. More slapsticky than most "Maisie" entries, Undercover Maisie subjects Ann Sothern to an incredible amount of physical abuse, though sharp-eyed viewers will be able to detect that she is extensively doubled by diminutive David Sharpe. ~ Hal Erickson, Rovi

Richard Simmons
as Gilfred I. Rogers

Dick Simmons
as Gilfred I. Rogers
View All

A breezy comedy about the bunco squad in Los Angeles.

There are no featured reviews for Undercover Maisie at this time.