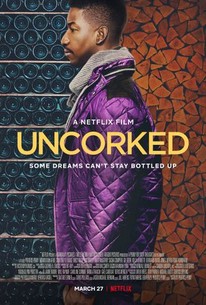 Critics Consensus: Like a good wine, once you let Uncorked breathe, its heartfelt tenderness will yield a sweet time.

Critics Consensus: Like a good wine, once you let Uncorked breathe, its heartfelt tenderness will yield a sweet time.

Critic Consensus: Like a good wine, once you let Uncorked breathe, its heartfelt tenderness will yield a sweet time.

Fueled by his love for wine, Elijah enrolls in a course to become a master sommelier, an elite designation given only to a handful who are able to pass its notoriously difficult exam. It's a dream that upends the expectations of his father, Louis (Courtney B. Vance), who insists Elijah take over the popular Memphis barbeque joint that's been passed down from father to son since its inception. Elijah struggles with the demands of school and a new relationship, while Louis wrestles with the feelings of his son rejecting the family business until a tragedy forces both of them to slow things down. Written and directed by Prentice Penny (Insecure), and starring Mamoudou Athie, Courtney B. Vance, and Niecy Nash, Uncorked is a hilarious and touching drama about a father and son who have to finally learn to listen to one another.

"Uncorked" pours an old, old wine into an unexpected new bottle, and while the results are hardly vintage, it still goes down better than two-buck chuck.

Captures an energy that's far too common in modern culture in regards to what we pursue, why we pursue it, and the way we dream. We all should be paying attention.

It's sweet, medium-bodied, and unchallenging. It's the kind of movie anyone can easily curl up with, without too much thought. Just don't forget the wine.

This is a very simple and very lightweight [comedy], but charming in its own way.

"Uncorked" is a familiar sort of story in a unique setting. The result is well-rounded, a bit too dry, yet it goes down with a pleasant finish.

[Uncorked] is closer to a satisfying, everyday table wine than a rare, award-winning bottle.

Uncorked is a surprisingly delightful and original film that explores the niche topic of winery expertise, and still finds a way to tell a heartfelt story of family and dreams.

The story - someone pursues an unusual profession to the chagrin of their family - is familiar. Luckily, the direction is deft and the acting is great (Courtney B. Vance is, as always, a standout), putting 'Uncorked' slightly higher than its peers.

A fresh perspective with a dose of originality.

Flavoursome enough without being especially nourishing, this will still be enjoyed by many out there looking for some sentimental sweetness in dark times.

The acting is unforced and the performers appealing.

Niecy Nash deserves a compliment for combining her comic moments with her character's more serious nature... However, Uncorked is nothing more than a complacent and sentimental film with a uniquel setting. [Full review in Spanish]

There are no featured reviews for Uncorked at this time.