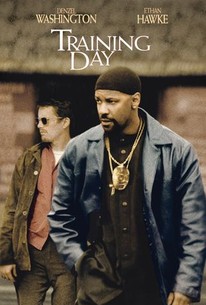 Critics Consensus: The ending may be less than satisfying, but Denzel Washington reminds us why he's such a great actor in this taut and brutal police drama.

Critics Consensus: The ending may be less than satisfying, but Denzel Washington reminds us why he's such a great actor in this taut and brutal police drama.

Critic Consensus: The ending may be less than satisfying, but Denzel Washington reminds us why he's such a great actor in this taut and brutal police drama.

The Fast and the Furious (2001) screenwriter David Ayer follows up that fast-paced action hit with this gritty cop drama from director Antoine Fuqua. Ethan Hawke stars as Jake Hoyt, a fresh-faced Los Angeles Police Department rookie anxious to join the elite narcotics squad headed up by 13-year veteran Detective Sergeant Alonzo Harris (Denzel Washington). Harris has agreed to give Hoyt a shot at joining his team with a one-day ride-along during which Hoyt must prove his mettle. As the day wears on, however, it becomes increasingly clear to the greenhorn that his experienced mentor has blurred the line between right and wrong to an alarming degree, enforcing his own morally compromised code of ethics and street justice. As he struggles with his conscience, an increasingly alarmed Hoyt begins to suspect that he's not really being given an audition at all; he's being set up as the fall guy in an elaborate scheme. Training Day co-stars Tom Berenger, Scott Glenn, and recording artists Snoop Dogg, Dr. Dre, and Macy Gray. ~ Karl Williams, Rovi

Will Foster Stewart
as Crackhead 2

Garland Whitt
as Crackhead 1
View All

We hadn't seen Washington play the bad guy before, and with his ferocious, dominating, and charismatic performance, the Oscar was his...

If he makes it through the trial by fire -- and a blandly twisting plot with no meaningful revelations or substantial themes -- Hawke will get a promotion, but there's nothing in it for us.

Director Fuqua keeps it slick and sleazy and stokes up the race some, but this only accelerates the movie's deafening rush toward the top and ever over.

Good to see Denzel Washington get the meaty villainous role he deserves.

On a purely visceral level, Training Day is easily the most exciting movie out there right now, but as a morality tale with anything large on its mind, it's a cop-out.

A brutal, fierce, and tense police thriller, Training Day takes a well-worn format and infuses it with freshness and verve.

Training Day is not a completely unnuanced parable on policing and a nice disavowal of the movie-perpetuated cliché of smug, streetwise copdom.

'Training Day' is still a very interesting thriller where Denzel Washington truly shines just as the lucid but equally necessary and inspired work of Ethan Hawke. [Full review in Spanish]

Great performances, but for adults only.

The movie moves rapidly, is extremely violent and not entirely plausible.

American cinema at his best. One of the best and clever films ever made.

This cop thriller spans over not much more than 12 hours of tough, gritty and morally grey work in the ugly parts of LA. Between drug addicts, dealers and gang members the rookie gets his lessons by the leader of the pack. Washington and Hawke are perfect choices for their roles and especially Denzel's performance is magnificent, keeping his character somewhere between insanity and reason, menacing and jovial at the same time, deserving the Oscar he got for it. As an outsider, it is hard to say how realistic the film, as it isn't exactly painting a very flattering picture of the LAPD. But it is the lack of any morally comforting formulas that makes the plot so enthralling. Does the rookie get an important lesson or is he in the car with the devil? This question, carried by the strong performances and a great cinematography make this film work. As things get more and more dire, the audience can't help but get engaged. Excellent.

Ethan Hawke plays a rookie cop looking to make detective by becoming part of Denzel Washington's narcotics task force. But is he teaching the rules of survival on the dog eat dog streets, or is he a psychotic and corrupt loose cannon using Hawke's inexperience for his own ends? The biggest appeal in this glossy cop thriller is seeing Denzel playing totally against his usual holier than holy type and if he'd taken more of these parts, I'd like him a whole lot more. Unfortunately it's the reliance on surface gloss that is the film's Achilles heel. If you asked a middle class 15 year old white boy what it's like to live in the "hood", this is exactly what he'd describe; basically a living hip-hop video, complete with rappers, lowriders and hot and gratuitously naked Puerto Rican babes. The story and direction is effective but it chugs along with little pause for suspense and it lacks the grittiness and believability of the similar Narc. It is clearly a quality action thriller that's fuelled by Washington's powerhouse performance but the female demographic may be put off by the constant macho posturing that makes it positively reek of testosterone.