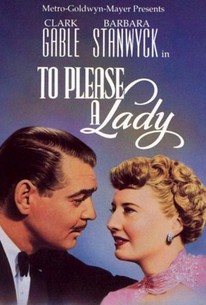 To Please a Lady Photos

Arrogant Mike Brannan (Clark Gable) is a famous driver of midget race cars and is the type of man crowds love to hate. He earned his bad-boy image after he is blamed for causing a fatal crash during a race. Wanting to see if all the hoopla is true, tough columnist Regina Forbes (Barbara Stanwyck) tries to interview her, but Mike refuses. Later she watches as he is involved in another deadly crash. Believing he deliberately caused the accident, she rakes him over the coals in her column and this leads to his disbarment from the racing circuit. In order to make ends meet, the disgraced Mike begins driving in a stunt show. Eventually, he earns enough money to allow him to buy a full-sized race car. The film's exciting finale was shot at the Indianapolis Speedway.

Will Geer
as Jack Mackay

Critic Reviews for To Please a Lady

Except tor some good racing scenes, there is little excitement in this story of the tough driver and the lady columnist. It has all been done too many times before.

It's not worth much as melodrama, but the action sequences are highly entertaining.

Audience Reviews for To Please a Lady

This movie has it's moments, but overall it's just another predictable love story with a bit of race car driving to make it exciting.

To Please a Lady Quotes