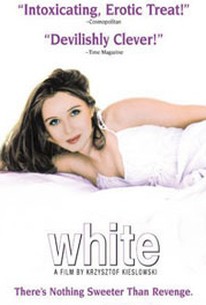 Critics Consensus: Taking a lighter tone than the other films of the Three Colors trilogy, White is a witty, bittersweet comedy with heavier themes on its mind than one might at first realize.

Critics Consensus: Taking a lighter tone than the other films of the Three Colors trilogy, White is a witty, bittersweet comedy with heavier themes on its mind than one might at first realize.

Critic Consensus: Taking a lighter tone than the other films of the Three Colors trilogy, White is a witty, bittersweet comedy with heavier themes on its mind than one might at first realize.

The second feature in filmmaker Krzysztof Kieslowski's "Three Colors" trilogy, the black comedy White features Zbigniew Zamachowski as Karol Karol, an expatriate Polish hairdresser whose French wife (the breathtaking Julie Delpy) divorces him after just six months of marriage because of his impotency. Penniless and devoid of his passport, Karol must journey back to Poland by hiding in a trunk. Upon his return, he slowly begins amassing a considerable fortune, ultimately hatching a perverse plot for revenge. Often unjustly dismissed as the weak link in the trilogy, White grows in strength upon repeated viewings. An allegory about equality, the film is mordantly witty, a cynical look at power, marriage and capitalism.

Florence Pernel
as Sandrine
View All

A bleak but ultimately hopeful comedy which, if it hadn't got to be called White, might very well be dubbed Black.

he love that figures centrally in White appears more as a postulate than as a realized fact. To achieve something more durable and persuasive, real characters are required, not allegorical stick figures.

It's often cruel, of course, and cool as an ice-pick, but it's still endowed with enough unsentimental humanity to end with a touching, lyrical admission of the power of love. Essential viewing.

How could the creator of Blue, the story of a woman who grieves by moping around Paris in a chichi haircut, possibly have followed it with such a rich, light-handed marvel?

Kieslowski, who so keenly satirized the crippling excesses of communism in his earlier work, unflinchingly has a go at training-wheels capitalism, but not without affection for the thawing tundra of his beleaguered mother country.

In Kieslowski's world, what goes around comes around, and Karol's journey to self-improvement ... is funny while also being strangely moving.

It's as if Kieslowski is playing God: guiding his characters through circumstances entirely out of their control, orchestrating the rhythms of everyday life with the ease of a puppet master... magical.

Unquestionably well made, and with a clever and very concentric vein of humour and storytelling verve sustained throughout.

This hugely talented director seems to do everything with a shrug -- scratching at subjects rather than excavating them.

[T]his is the comedy of the trilogy, not so much a black comedy as a wicked satire in the cold white light of Polish winter, which (as you would expect) informs the color palette of this film.

The lightest installment in Krzysztof Kieslowski's Three Colors Trilogy is this sharp film that works quite well as a strange type of comedy (or anti-comedy) that offers an ironic look at evenness and equality (ideals symbolized by the color white in the French flag).

Kieslowski knows as much about comedy as I do about stochastic calculus.

A breezy, light-hearted dramady concerning a recently divorced, devastated tramp (Zbigniew Zamachowski) who struggles to start a new life away from his ex-wife (Julie Delpy), who he still loves. Unlike 'Blue' (still a fine film overall), this movie flies. It is funny, has a lovable lead character, and is both a fascinating study of Polish culture as well as a far-fetched but totally entertaining revenge plot, which plays neatly into the film's central message of "Who are your friends, and do you try to 'get back' at your enemies?". This is widely considered to be the weakest of the 'Colors' trilogy, but I disagree. This is a very good film which works very well at a couple different levels, while never betraying itself or getting self-indulgent with its running time.

A comical sequel on "equality" that develops a story that appeared as a fleeting cameo in Blue. It's a very typical Eastern European kind of absurd humour that can be a bit silly at times, but is always entertaining.