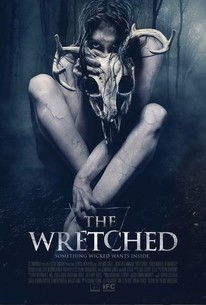 Critics Consensus: The Wretched stirs up a savory blend of witch-in-the-woods horror ingredients that should leave genre fans hungry for a second helping from writer-directors Brett and Drew T. Pierce.

Critics Consensus: The Wretched stirs up a savory blend of witch-in-the-woods horror ingredients that should leave genre fans hungry for a second helping from writer-directors Brett and Drew T. Pierce.

Critic Consensus: The Wretched stirs up a savory blend of witch-in-the-woods horror ingredients that should leave genre fans hungry for a second helping from writer-directors Brett and Drew T. Pierce.

Following his parents' separation, a rebellious teenage boy, Ben, is sent to live with his father for the summer and work at the local marina in order to gain some form of discipline. The idyllic tourist town offers little solace for him, however, as he is forced to deal with the local, privileged teens and his father's new girlfriend. Ben's problems grow increasingly disturbing when he makes a chilling discovery about the family renting the house next door. A malevolent spirit from the woods has taken a hold of the parents and starts playing a sinister game of house, preying upon the children and wiping away any trace of their existence. Ben's suspicions of the supernatural horrors go unheeded and he launches a perilous crusade in order to put an end to the skin-walking witch's reign of terror. Chilling and suspenseful, THE WRETCHED offers a modern update to the retro young hero's mission like that of The Goonies, and promises to make viewers wary of every dark corner they encounter after witnessing its terrifying tale.

News & Interviews for The Wretched

View All The Wretched News

Critic Reviews for The Wretched

"The Wretched" doesn't reinvent the rules, but it has a timeliness to it that's hard to shake.

If this really was some lost relic of the VHS era, it'd pass the blind rental test: There is a witch, and she's as creepy as the box art would surely promise.

The Wretched doesn't work as either comfort food or gross-out entertainment.

Equally indebted to Alfred Hitchcock, Steven Spielberg and a mishmash of '80s horror films only the directors themselves could comprehensively name-check, "The Wretched" is a fresh horror film built out of familiar parts.

It's a development worthy of M. Night Shyamalan, but they've run out of runway and there's only enough room left to battle the witch.

Peter Gray
This is Film

Slick and polished, with enough gore and excellent creature effects to satiate horror fans, much of "The Wretched" is solid if standard genre fare.

Ultimately, however, The Wretched is a dark and downright spooky fairy tale that balances fun and scary with precision. Pair this up with Pyewacket and you're in for one hell of a witchy weekend.

There are no featured reviews for The Wretched at this time.