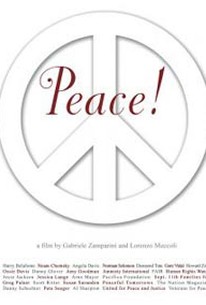 A pair of pacifist-minded documentarians reach out to dozens of their generation's greatest thinkers in a bid to ensure a peaceful future for all in this documentary that encourages viewers to take an active role in the peace process. From September 2002 to May 2003, filmmakers Gabriele Zamparini and Lorenzo Meccoli conducted interviews with such internationally recognized thinkers as Noam Chomsky, Howard Zinn, Gore Vidal, Jesse Jackson, Ossie Davis, and Desmond Tutu to explore peaceful solutions to global conflict. In addition to exploring various alternatives to war and weapons of mass destruction as a means of solving conflict, these interviews provide fascinating insight into the modern era while simultaneously offering a look inside the minds of some of the planets greatest tinkers, activists, and leaders.

Critic Reviews for The Peace! DVD

There are no critic reviews yet for The Peace! DVD. Keep checking Rotten Tomatoes for updates!

Audience Reviews for The Peace! DVD

There are no featured audience reviews yet. Click the link below to see what others say about The Peace! DVD!