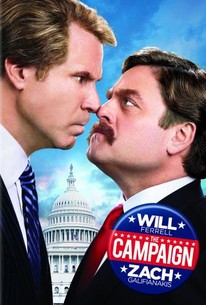 Critics Consensus: Its crude brand of political satire isn't quite as smart or sharp as one might hope in an election year, but The Campaign manages to generate a sufficient number of laughs thanks to its well-matched leads.

Critics Consensus: Its crude brand of political satire isn't quite as smart or sharp as one might hope in an election year, but The Campaign manages to generate a sufficient number of laughs thanks to its well-matched leads.

Critic Consensus: Its crude brand of political satire isn't quite as smart or sharp as one might hope in an election year, but The Campaign manages to generate a sufficient number of laughs thanks to its well-matched leads.

When long-term congressman Cam Brady (Will Ferrell) commits a major public gaffe before an upcoming election, a pair of ultra-wealthy CEOs plot to put up a rival candidate and gain influence over their North Carolina district. Their man: naïve Marty Huggins (Zach Galifianakis), director of the local Tourism Center. At first, Marty appears to be the unlikeliest possible choice but, with the help of his new benefactors' support, a cutthroat campaign manager and his family's political connections, he soon becomes a contender who gives the charismatic Cam plenty to worry about. As Election Day closes in, the two are locked in a dead heat, with insults quickly escalating to injury until all they care about is burying each other, in this mud-slinging, back-stabbing, home-wrecking comedy. -- (C) Warner Bros.

Will Ferrell
as Cam Brady

Wolf Blitzer
as Himself

Piers Morgan
as Himself

Bill Maher
as Himself

Chris Matthews
as Himself

Dennis Miller
as Himself

Lawrence O'Donnell Jr.
as Himself

Joe Scarborough
as Himself

Mika Brzezinski
as Herself

Willie Geist
as Himself

Ed Schultz
as Himself

Ed Schultz
as Himself

Gerry May
as Carter Baines

Mike 'The Miz' Mizanin
as The Miz

Randy Bachman
as Himself (Bachman & Turner)

Randy Bachman
as Himself (Bachman & Turner)

Mick Dalla-Vee
as Himself (Bachman & Turner)

Trey Burvant
as Man at Debate

Colleen Craig
as Dancer
View All

News & Interviews for The Campaign

View All The Campaign News

Critic Reviews for The Campaign

Perhaps one in ten of the jokes hits the mark; the rest are damp, childish squibs

There are some laughs, it doesn't overstay its welcome and neither side in the present fight for the presidency is likely to be offended.

If you're solemnly looking for contemporary political observation, this isn't the film for you. But laughs come rolling off the production line a-plenty.

Who says political satire is dead? Most of the audience for The Campaign will say it.

All sounds a bit déjà vu. Didn't they make this in the late-'90s with Chris Farley and David Spade?

More of the non sequitur jokes and shouting on which [Ferrell] has built a lucrative and long-lasting career.

There are enough gems in this political satire to raise more than a hearty chuckle.

While many audience members may be suffering from political fatigue this election year, The Campaign exposes the process for the circus it truly is.

This rapid-fire comedy has plenty more hits than misses - and at times a scathing satire of the current election process.

If this year's presidential campaign doesn't provide enough laughs for your liking, here is one that will.

Filled with the broad stereotypes typical of an increasingly divisive electorate and of a Will Ferrell vehicle, but there's a broader and in fact biblical message at the movie's heart. What do you benefit if you gain the world but lose your own soul?

Audience Reviews for The Campaign

A few funny moments, but in light of all the Trump stuff, pretty accurate viewing, even though it was made prior to all this and I am just late watching it. Below average comedy.

An average satire of the cancerous political platform known as the campaign for public office, with two of the most powerful comedic titans of the industry (Will Ferrell, Zack Galifianakis) at the helms. It starts to head in the right direction near its conclusion, but sadly it is already too late. Ferrell sports another over the top performance that we are all used to, while Galifianakis and his silly southern accent are not as utilized. Americans need a movie with a ferocious political bite like say, "Wag the Dog", especially now, when the future of our country looks bleak. Sadly, "The Campaign" is not that beast, instead it comes across as somewhat likable but largely forgettable, and probably a film that should have been on Ferrell's "Funny or Die" website as a 5-10 minute sketch, not an hour and a half long film.

A real riot. This movie gets my vote. A raunchy, wild and hilarious comedy. Zach Galifianakis and Will Ferrell are comedy gold together. A super funny satire that packs plenty of laughs and a great cast. Dylan McDermott and Jason Sudeikis are terrific. A really funny good time. Over the top fun from start to finish.

Not Ferrell's best turn, but he's done much worse. And Zach Galifianakis isn't doing much you haven't seen before, rolling his Seth Galifianakis character into his role as bumpkin-cum-politician Marty Huggins. But what you see really is what you get: two talented comic foils going at each other for 90 minutes. The story is a bit thin but the supporting cast is also funny. There can be only one Anchorman in Ferrell's career - even if he is making a sequel - and this isn't it. That doesn't mean there's anything wrong with the movie. It's a comedy... laugh already.