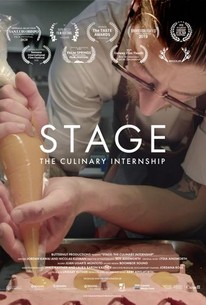 The Culinary Internship follows a group of aspiring chefs during a nine-month apprenticeship at one of the best restaurants in the world: Mugaritz, nestled in the hills outside San Sebastian. While the twice Michelin starred restaurant's notorious avant-garde cuisine elevates these young hopefuls to think outside the confines of a kitchen, can they handle the heat of its intense creative environment? Featuring Chef Andoni Luis Aduriz (judge on Netflix's Final Table).

An engaging if unenlightening trip through a rarefied experience.

In the same way that such high-end eateries provide scrumptious morsels, one doesn't leave Stage feeling full, but rather with a broadened palette of curiosity.

Don't go in with an empty stomach.

Just think of how your life would change if you could intern at one of the world's 50 top restaurants.

There are no featured reviews for Stage: The Culinary Internship at this time.