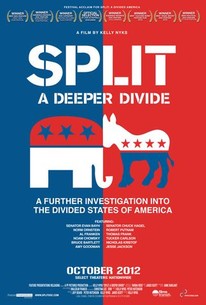 SPLIT: A Deeper Divide carries the riveting investigation into the partisanship paralyzing our politics initiated by the critically-acclaimed SPLIT: A Divided America - further revealing a shocking political portrait of a nation even more profoundly polarized and deeply divided than before. The thought-provoking documentary explores the historically unprecedented partisan rancour plaguing our country and our politics through extraordinary access to some of the sharpest minds analyzing politics and society today including Senator Bayh (D-IN), Senator Hagel (R-NE), Lawrence Lessig (Director, Foundation of Ethics; Harvard), Grover Norquist (American for Tax Reform) Jacob Hacker (Director, Institution for Social and Policy Studies; Yale), Ezra Klein (MSNBC), Robert Kaiser (Washington Post), Norm Ornstein (AEI), Thomas Frank (Wall Street Journal), Noam Chomsky (MIT), Robert Putnam (Harvard), Jesse Jackson (Rainbow/PUSH Coallition), Nicholas Kristof (NY Times), Tucker Carlson (Fox News), Amy Goodman (Democracy Now) among others - for commentary as insightful as it is entertaining. The film moves beyond the headlines of sound-bite battles pitting conservatives vs. liberals to the deeper questions of why - why have we become two Americas? what are the forces - social, cultural, economic - that divide our nation so deeply that we are unable to even discuss our differences? SPLIT: A Deeper Divide is an unflinching look at our fractured nation that offers a much needed non-partisan perspective on what lies beneath the divides splitting the country. The documentary is an absolute must-see before the election.

It's a solid, fairly even-handed spur for discussion that will be particularly welcome in classroom settings.

Even political foes agree here on today's parlous state of disagreement, leaving you keen to vote but feeling a little defeated already.

As an election-season reminder that our democratic system isn't functioning, it serves as a welcome wake-up call.

There are no featured reviews for Split: A Deeper Divide at this time.