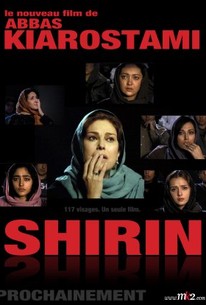 A hundred and fourteen famous Iranian theater and cinema actresses and a French star: mute spectators at a theatrical representation of Khosrow and Shirin, a Persian poem from the 12th century, put on stage by Kiarostami. The development of the text -- long a favorite in Persia and the Middle East--remains invisible to the viewer of the film, the whole story is told by the faces of the women watching the show.

One of Abbas Kiarostami's trickiest and most radical experimental works.

Shirin offers a feast for the bedazzled eye and a crash course in narrative obsession for the benumbed mind.

Watching a movie in a movie theater is an act of collective loneliness. Shirin makes that loneliness cathartic, but by not showing the film within the film, Kiarostami avoids transforming it into entertainment.

The obvious artifice of the picture track, scarcely less stylized than the mythic soundtrack, seems to exclude the kind of obvious appeal documentary might have.

(Kiarostami) studies the roadmap of the face, faces of women both young and old, faces framed by head scarves that are limned by the flickering light of the faux movie screen.

The melodramatic, passionate "Shirin" story drives everything forward, and gazing at the faces of these amazing women can be a compelling experience in itself.

It powerfully reminds us of the persuasiveness of art as it simultaneously stresses the humanist perspective of its singular, innovative creator.

for all the probing beauty of Kiarostami's close-ups, Shirin depends entirely on a concept better suited to a shorter duration. By the 20-minute mark, the viewer has got it - and from there on in, the film is just a pretty face (or several).

There are no featured audience reviews yet. Click the link below to see what others say about Shirin!