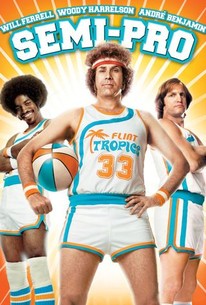 Critics Consensus: Semi-Pro is an intermittently funny, half-hearted attempt at sports satire, and one of Will Ferrell's weaker cinematic efforts.

Critics Consensus: Semi-Pro is an intermittently funny, half-hearted attempt at sports satire, and one of Will Ferrell's weaker cinematic efforts.

Critic Consensus: Semi-Pro is an intermittently funny, half-hearted attempt at sports satire, and one of Will Ferrell's weaker cinematic efforts.

The American Basketball Association is on the verge of collapse, and when a former NBA benchwarmer returns to his hometown of Flint, MI, to whip his former team into shape for the playoffs, redemption is just a free throw away in this period sports comedy starring Will Ferrell and Woody Harrelson. Penned by Old School scribe Scot Armstrong, Semi-Pro tells the tale of a 1970s-era basketball player who doesn't have much luck in the NBA, but vows to leave his mark on the sport by coaching the Flint Tropics. When the upstart ABA league agrees to be absorbed by the NBA, only four teams will be allowed in. Jackie Moon (Ferrell) must orchestrate a successful season both on the court, and financially off the court with the help of many odd promotional events, in order to remain in the sport he loves. ~ Jason Buchanan, Rovi

Will Ferrell
as Jackie Moon

Will Arnett
as Lou Redwood

The semifunny Semi-Pro is amiable enough, but you never feel there's much at stake.

Judging from this low-scoring sports comedy about the mystique of men with balls, Will Ferrell needs to call a time-out from belly baring to refocus his fan-favorite game of playing clueless male doofuses.

You take the Will Ferrell formula and you plug it in, but somehow it just feels kind of uninspired and flat.

There are some ludicrous sight gags and uniquely silly, if foul-mouthed, laughs. The movie falters when it tries to be serious. Fortunately, those moments are few.

You can't help but marvel, and laugh at, Ferrell's indefatigable enthusiasm and willingness to make a complete ass of himself.

I laughed from start to finish at its relentlessly, energetically profane absurdity and a cast crammed with funny actors in even the smallest roles.

"Pro" proves to be more miss than hit, with some spotty comedic moments and a story that is really nothing more than spare parts of much better films in the same genre.

Semi-Pro is, to put it charitably, semi-good. And I'm sure it will make a load of money.

Semi-Pro has a lot of problems, not the least of which is that it is simply bone lazy in terms of plot development, story and pretty much everything else.

Semi-Pro will likely leave its star with a sore throat and bruised pride but a bulging wallet nonetheless: it's possibly the first movie ever to be less funny than the products it advertises.

Semi-Pro isn't the most well-designed of comedies, it's far too disjointed without enough thought given to making it work as a whole, but there are enough genuinely funny moments, especially from upstart Daly, to make it worth a look.

Root-canal territory all the way

More like semi-funny. Good thing Will Ferrell made up for this flop with Step Brothers right after.

This is really a lame sports comedy, we've seen so many films like this now, especially with the 70's look going on, its extremely old and cliched. To make things worse this isn't even funny, only two occasions actually made me laugh, the rest of the time its just kinda dull. All the characters, looks and ideas have been done before, Ferrell has played this same charcter afew times now and its getting boring. Harrelson has made much better with 'White Men' and 'Kingpin', the latter being a truely brilliant sports spoof of sorts. This is just 'Talladega Nights' with basketballs, the only impressive thing was Harrelsons wig.

The Greatest Fro on Earth Saw it again! Will Ferrell + Basketball = To me a good comedy which I enjoyed and laughed alot. Easy story to follow and never boring. Nice cast. Three men, three dreams. It's 1976 in Flint, Michigan. Jackie Moon's American Basketball Association team languishes in last place, with few fans in the seats. Jackie dreams of a merger with the NBA. A tough-minded point guard named Monix is at the end of his career; he's played on the champion Celtics but accepts a trade to Flint to be close to Lynn, the love of his life. Clarence "Coffee" Brown dreams of stardom: he's the Tropics' best player, but he's a hotdog who doesn't value teamwork. When the trio learns that a merger is in the works that won't include the Tropics, they pull the team together to try to achieve the impossible. Can dreams come true in Flint?