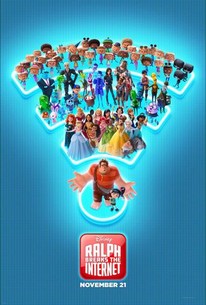 Critics Consensus: Ralph Breaks the Internet levels up on its predecessor with a funny, heartwarming sequel that expands its colorful universe while focusing on core characters and relationships.

Critics Consensus: Ralph Breaks the Internet levels up on its predecessor with a funny, heartwarming sequel that expands its colorful universe while focusing on core characters and relationships.

Critic Consensus: Ralph Breaks the Internet levels up on its predecessor with a funny, heartwarming sequel that expands its colorful universe while focusing on core characters and relationships.

In "Ralph Breaks the Internet," video-game bad guy Ralph (voice of John C. Reilly) and best friend Vanellope von Schweetz (voice of Sarah Silverman) leave the comforts of Litwak's arcade in an attempt to save her game, Sugar Rush. Their quest takes them to the vast, uncharted world of the internet where they rely on the citizens of the internet--the Netizens--to help navigate their way. Lending a virtual hand are Yesss (voice of Taraji P. Henson), the head algorithm and the heart and soul of the trend-making site "BuzzzTube," and Shank (voice of Gal Gadot), a tough-as-nails driver from a gritty online auto-racing game called Slaughter Race, a place Vanellope wholeheartedly embraces--so much so that Ralph worries he may lose the only friend he's ever had.

Movies don't get more timely than Ralph Breaks the Internet - an exhilarating yet dismaying sequel to 2012's Wreck It Ralph, for my money easily the smartest and most endearing Disney animated feature of recent years.

Conceptually, it's rather ingenious, with well-aimed barbs at abusive commenter culture and social-media narcissism that adds up to a welcome moral for small fry...

Best of all, the directors don't shy away from the ending their story demands.

The nuanced friendship between Ralph and Vanellope remains the most engaging part of the film, once you've overcome the slight weirdness of a hulking man being best mates with a small girl.

Surprisingly enjoyable, if not predictable.

It's pretty incredible to see how the filmmakers easily and boldly slip concepts right from the therapist's office into the wild rumpus through the internet.

Despite my nit-picky small disappointments, Ralph Breaks the Internet is still a fun sequel, with some interesting commentary on internet culture.

It's charming and self-aware, but not enough to really elevate Ralph Breaks The Internet beyond a routine kid-pleasing pot boiler.

Ralph Breaks the Internet is sweet, funny and clever, proving that Disney can create something more relatable than your typical fairytale.

There are dozens and dozens of internet meme callouts, appearances by YouTube celebrities like Dani Fernandez, Colleen Ballinger[...But the best part of Wreck-It Ralph 2 really is the story of growth between Ralph and Vanellope.

Ralph Breaks The Internet comes across as a lifeless cash grab designed to promote every single brand known to man. There are some creative ideas, but the heart of the first film is completely gone.

Ralph Breaks the Internet skewers its many online targets with a lot of wicked wit.

As a proud product of 2018, it is safe to say that this movie will soon be dated and half of its jokes will be lost for a new generation, but despite that (and the fact that the climax is a bit messy), it can be quite entertaining with its concept and design of an internet world.

There's a story about friendship here that's the gut of the thing, and it'll do nicely, thank you very much, even drawing some tears effectively near the end, but this animated gem is about stoking the internet meme age. Practically every shot demands that one stop the action so as to focus on whatever visual gag may be in the background. That'll probably eat of loads of somebody's time. And the Disney princesses portion is the gag reel highlight.

Vast in its landscape and world-building to go along with a heartfelt story, Ralph Breaks the Internet expands visually and internally. The film's dazzling take on its universe and maintenance on characters, both old and new, easily tops its predecessor and sets a brand-new scale for not only Disney-animated films, but animated films overall. 5/5