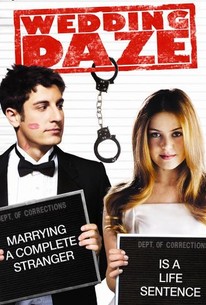 The romantic comedy Wedding Daze stars Jason Biggs as Anderson, a young man all set to ask his girlfriend to marry him when, during the actual proposal, she dies. After spending a year in a depression, Anderson impulsively asks a waitress named Katie (Ilsa Fisher) to marry him even though they have never met. When she surprisingly agrees, the two must deal with the reactions of their respective friends and families. The supporting cast includes Joe Pantoliano as Katie's convict father. Michael Ian Black, formerly of The State and Ed, made his directorial debut with this film.

Andrea Rosen
as Woman On Bus
View All

There's precious little pleasure to be had among the aggregation of mannered, eccentric losers in slapstick misfire The Pleasure of Your Company.

Something of a train wreck...[but] comedy scavengers may find it worthwhile to pick through the remains for a few amusing gags. [Blu-ray]

Lacks the most basic charm and one-liners of films like The Wedding Singer, Love Actually and Bridget Jones' Diary.

Joseph Proimakis
Movies for the Masses

Hoping for these guys decide to get married is kind of like rooting for Britney Spears to get hitched again.

A rancid lump of tedium that makes a great case for keeping Black in front of the camera for the rest of his career.

This film's sharp and funny script is somewhat undermined by a barrage of American Pie stupidity.

Rich Cline
Shadows on the Wall

Doesn't this have that kinda hot but super annoying so therefore a little less hot than she should be redhead chick from that other kinda funny movie about weddings, except that wasn't really about weddings it was more about the idea of being wed, you know, like a more abstract David Lynchian sort of thing, but then if you think about it, this movie isn't really about a wedding either it's about two people obsessed with marriage... but then that is what wedding crashers was about, huh? okay nevermind, i didn't really care for this one. real complex.

An ok Rom-com, pretty run of the mill, but it does have some good funny scenes. Kinda cute and funny, the chemistry between the two leads is good but the parents are quite funny to. Worth checking out.

I expected this to be worse than it was. Cute, over the top romantic comedy with quite a few laughs. Jason Biggs and Isla Fisher make a likeable couple. You could certainly rent out worse movies.

I am surprised at how much I really liked this movie. Its insane, chaotic, and so funny. Jason Biggs and Isla Fisher had great chemistry. Really brought the laughs. OMG. The two actors that play Jason Biggs parents are just insanely funny. So gross too though. I would be horrified if those were my parents. The funniest line in this movie comes from Joe Pantoliano character who is Isla Fishers father. As he is walking her down the isle he turns to her and says, "Look at me, crying like a jail house bitch." So funny. There is plenty of funny moments like that. Its a great quirky romantic comedy that anyone is sure to enjoy.