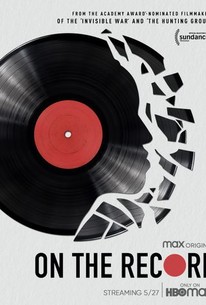 Critics Consensus: On the Record uses harrowing first-person accounts to powerfully and persuasively confront the entrenched sexism of an industry and its culture.

Critics Consensus: On the Record uses harrowing first-person accounts to powerfully and persuasively confront the entrenched sexism of an industry and its culture.

Critic Consensus: On the Record uses harrowing first-person accounts to powerfully and persuasively confront the entrenched sexism of an industry and its culture.

On the Record Photos

Directed and produced by Kirby Dick and Amy Ziering (The Hunting Ground, The Invisible War), and first reported by the New York Times, On The Record presents the powerful haunting story of music executive Drew Dixon (collaborator on hit records by Method Man and Mary J. Blige, Estelle and Kanye West, and Whitney Houston) as she grapples with her decision to become one of the first women of color, in the wake of #MeToo, to come forward and publicly accuse hip-hop mogul Russell Simmons of sexual assault.

News & Interviews for On the Record

View All On the Record News

Critic Reviews for On the Record

This compelling story of sexual assault and powerful men violently abusing their positions is a reminder than the #MeToo movement didn't begin - or end - with Harvey Weinstein.

The film is forthright and intelligent on the difficulties and complexities involved in the discussion.

On the Record is a lesson in power and its caprices.

A story of pain and complexity...

The rare #MeToo documentary that grapples frankly with its accusers' uncertainty about coming forward.

By detaching itself from Simmons's legacy, On the Record centers the women's stories.

On the Record co-directors Kirby Dick and Amy Ziering don't lose sight of the overall message...Sexual misconduct should not be excused because of someone's race, and #MeToo survivors should not be shamed or pressured to keep silent because of their race.

On The Record does a good job of showing that Black women feel like they have been forgotten during these advancements. For all of us to move forward, their voices need to be heard.

It's a poignant reminder for black women that relief can be found if their voices are heard. In order to do that, society needs to listen and On The Record is an important place to start.

The film feels like a brave act of confession from these women, and a passionate plea for justice.

Rich Cline
Shadows on the Wall

A documentary that unpacks a lot in only 90 minutes, with the sad reality that this is only the tip of the iceberg both inside and outside of the music industry.

There are no featured reviews for On the Record at this time.

On the Record Quotes