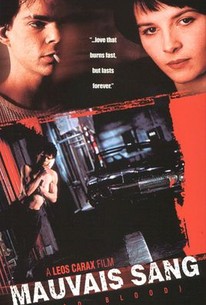 This critically acclaimed French drama blends film noir and science fiction elements in a story about a strange and deadly plague. A sexually transmitted disease called STBO is sweeping the country; it's spread by having sex without emotional involvement, and most of its victims are teenagers who make love out of curiosity rather than commitment. While a serum that can treat the disease has been formulated, it's been locked away in an inaccessible government building, and most of those suffering can't get at it. A woman known as "The American" (Carroll Brooks) has hired Marc (Michel Piccoli), who is deep in debt and desperate for cash, to steal the drug; Marc enlists the aid of Alex (Denis Lavant), the teenage son of one of his close friends, to help pull off the robbery. Alex is in love with Lise (Julie Delpy), a girl his age that he's been involved with, but he finds himself attracted to Anna (Juliette Binoche), Marc's younger lover who is determined to stand by her man. Mauvais Sang received the Alfred Bauer Prize at the Berlin International Film Festival and the International Fantasy Film Award at the Fantasporto Film Festival. ~ Mark Deming, Rovi

Carroll Brooks
as The American woman

Mireille Perrier
as The Young Mother

A masterpiece of ecstatic cinema from 1986, directed by Leos Carax at the age of twenty-five.

Carax does not want to tell you a story. He wants to express, in the purest way he can, his infatuation with storytelling through images and genre conventions, performance and voyeurism, cinema and cinephilia.

A salute, at once moody and ebullient, to the cinema of the past and the ferocious intensity of youth.

In this, his second feature, [director Leos] Carax lives up to his billing as ''the natural heir of Jean-Luc Godard,'' showing a taste for underground types and milieus, an inventive eye and a tolerance for tedium.

A work of a conscientious erudite who still has absolutely nothing to say. [Full Review in Spanish]

In a sense, Mauvais Sang is a poetic, tragic love story (actually three love stories) disguised as a B movie.

Alex and Anna's interactions are the enchanted heart - volleying between sequences of the two at play and ones that emphasize their loneliness and disconnection.

The easiest way to find entry into the film is to accede to its reveries, even if they only temporarily make sense, and to welcome and possibly celebrate its shifting tones and techniques.

Once again we have the dancing tracking shot (to Bowie's 'Modern Love'), ventriloquism, fire breathing and a masterful, allegorical parachute jumping sequence.

Its romantic moody style had a lyrical way about it that was affecting.

Another outstanding work by Carax.

What is most memorable in this lyrical film about unrequited young love is Carax's stylish direction together with a sublime cinematography and production design, even though he overdoes it sometimes and would only be en pointe with his approach in his following oeuvre.

Very stylish, beautifully shot romantic drama. Though I wasn't a fan of the lead actor, there were a couple of scenes in here that were so cool they made my hair stand up. The deep conversations about love were thoughtful too. I say, why not, give it a try.