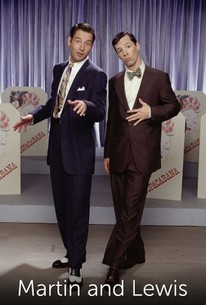 The meteoric rise of the most successful American comedy team of the 20th century is colorfully chronicled in the made for TV biopic Martin and Lewis. Sean Hayes of Will & Grace fame delivers an astonishing performance as the young Jerry Lewis, easily outdistancing British actor Jeremy Northam's capable but phlegmatic portrayal of Dean Martin. The film focuses on the years 1945 to 1956, during which a promising nightclub singer named Dean Martin finds himself pairing up with a manic Borscht-belt comic named Jerry Lewis. Sky rocketing to success in films and TV, Martin and Lewis enjoy a fanatical following comparable to the one attending The Beatles in the 1960s, but ultimately fame and fortune exacts a heavy toll upon the friendship of the two entertainers, culminating in a well-publicized breakup. The script does not flinch in its recreation of Martin's aloof selfishness or Lewis' bullying megalomania, but at the same time the viewer sees the positive character traits of both men, as well as their desperate yearning to be loved and accepted -- not only by their fans, by their families and friends. And even though he is not always shown in the best light, Jerry Lewis, surviving member of the team, loved the film and gave it his unconditional blessing when Martin and Lewis made its CBS bow on November 24, 2002. ~ Hal Erickson, Rovi

Critic Reviews for Martin and Lewis

As Dean, Jeremy Northam is an odd and interesting choice, equally at home as a sedated crooner in a forties nightclub as he was as a lovesick poet in nineteenth-century Possession.

There are no featured reviews for Martin and Lewis at this time.