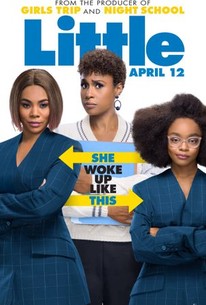 Critics Consensus: A disappointingly uneven but overall agreeable spin on a familiar formula, Little benefits from a big heart -- and a story that makes good use of its talented, well-matched cast.

Critics Consensus: A disappointingly uneven but overall agreeable spin on a familiar formula, Little benefits from a big heart -- and a story that makes good use of its talented, well-matched cast.

Critic Consensus: A disappointingly uneven but overall agreeable spin on a familiar formula, Little benefits from a big heart -- and a story that makes good use of its talented, well-matched cast.

Marsai Martin (TV's Black-ish) stars in and executive produces Universal Pictures' LITTLE, a comedy from producer Will Packer (Girls Trip, Ride Along and Think Like a Man series) based on an idea the young actress pitched. Directed by Tina Gordon (Peeples), the film tells the story of a woman who-when the pressures of adulthood become too much to bear-gets the chance to relive the carefree life of her younger self.

When the film is funny, it's hilarious, but the comedy is too spread out, and not even the central performances can save it.

I liked it, but it's also not that great.

Little is mostly a charming comedy with a killer soundtrack and heart to spare.

The cheerful action offers several moments of snappy comedy but feels largely forced; the road to the happy ending is long and narrow.

"Little" is essentially a one-joke movie, but Martin is so charming as a mini tyrant that it gives the joke legs.

As many times as I tried to get onboard with its proposed brand of breezy fun, it kept kicking me off, if only because I found myself running up against the very foundation of its premise.

Issa Rae deserves a feature comedy way smarter than this

Catch it on cable for a half hour or so but should feel free to shut it off as soon as they get bored.

The script, by Tracy Oliver and director Tina Golden, is episodic and scattershot, but the movie works anyway, as a showcase for Marsai Martin of TV's Black-ish, who gives a spectacular turn as the little version of our heroine.

I did enjoy the performances, but I thought it was all over the place. It's not the worst way to spend an hour-and-a-half, though...

I think it's cute, quirky, whimsical and fun. Don't take it too seriously or try to figure out the logic.

There are no featured audience reviews yet. Click the link below to see what others say about Little!