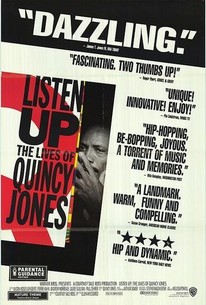 The extraordinary life of Quincy Jones -- one of the 20th century's most influential and talented composers, musicians and music producers -- provides the basis of this offbeat, free-form documentary tribute. With little regard for formal timelines and traditional documentary biography methods, the film is an amazing patchwork of personal insights featuring a constellation of music stars including his long-time friend Ray Charles, Miles Davis, Frank Sinatra, Herbie Hancock, Ella Fitzgerald, Michael Jackson, Aretha Franklin, Dizzy Gillespie and rappers Big Daddy Kane and Flavor Flav, as well as politicians, filmmakers and other important people. Some of the most moving scenes involve Jones returning to his childhood home in Chicago and recounting honest and painful memories from his childhood. Jones does not shy from discussing everything -- from his mother's mental illness, to his marital problems, to his serious health conditions. He also looks frankly at his career. ~ Sandra Brennan, Rovi

Alex Haley
as Himself

Kool Moe Dee
as Himself
View All

Critic Reviews for Listen Up: The Lives of Quincy Jones

There are no critic reviews yet for Listen Up: The Lives of Quincy Jones. Keep checking Rotten Tomatoes for updates!

Audience Reviews for Listen Up: The Lives of Quincy Jones

A great documentary for a great musician/producer. It takes a lot of guts to move back and forth through a man's life without it feeling disjointed. These film makers make it happen.

The life of record producer, composer, arranger, etc. Quincy Jones has been very interesting. I would have rated it higher only if I could have understand what all that people was saying, despite having a lot of famous faces and great footage, the montage is messy and feels jumpy, but it had all the potential to be a great documentary, it just needed a competent editor.

Listen Up: The Lives of Quincy Jones Quotes