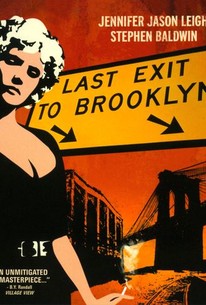 Adapted from Hubert Selby Jr.'s underground novel, Uli Edel's bleak film is set among the Brooklyn world of the early 1950s, a place populated by prostitutes, junkies and thugs. The episodic tale reins in figures like Tralala (Jennifer Jason Leigh), a hooker who lures her tricks to back alleys where they are mugged by ex-con Vinnie (Peter Dobson); Harry (Stephen Lang), the union boss troubled by his closeted homosexuality; Big Joe (Burt Young), a striking blue-collar worker with a pregnant single daughter (Ricki Lake); and others.

Zette Sullivan
as Regina
View All

These are fellow human beings who suffer, who are limited in their freedom to imagine greater happiness for themselves, and yet in their very misery they embody human striving.

What makes these stories utterly depressing is not the despair they disclose with routine banality, but the utterly relentless violence the film deploys against any character who even attempts to change his/her fate.

Cinematic style and Jennifer Jason Leigh make this worth watching.

For the most part, Edel captures the harrowing grim tone of the book and the compassion the author had for his unsympathetic flawed characters.

German director Eli Edel has fashioned a grim yet coherent and extremely well acted tale out of Hubert Selby's 1964 collection of short stories about misfits, criminals and outsiders in Brooklyn's Red Hook, circa 1952.

So bleak a vision as to be obsessive and ultimately shallow.

The pockmarked buildings have a peeling grayness, as if some forgotten battle had been waged there and dulled everything in its wake.

Although critically revered, Last Exit to Brooklyn is not compelling enough to keep your attention. These are unsympathetic characters that you feel nothing for despite the film's best efforts.

"Last Exit to Brooklyn" starts out with a group of soldiers impugning the honor of Tralala(Jennifer Jason Leigh), followed by the predictable beatdown by some of her friends. To be fair, not only is she a prostitute, but one who also helps to fleece some of her customers. To be honest, times are tough all over in 1952 Brooklyn with the strike going on which probably does not make it the best time for Big Joe(Burt Young) to learn his daughter Donna(Ricki Lake) is pregnant with Tommy's(John Costelloe) baby. Maybe they were just looking for love which is why Georgette(Alexis Arquette) is looking for Vincent(Peter Dobson). As watchable as it is, "Last Exit to Brooklyn" is also very much an odd duck, taking Hubert Selby's novel of down and out Brooklyn life in the 1950's and showing it through a European prism. So, even with an American cast that includes Jerry Orbach and a couple of stunning set pieces, it still feels a little off. On the one hand, the movie desperately wants to be provocative in its use of sex and violence. While it might also seem it is about loss of innocence, it is only in perception, like Big Joe not being aware that his daughter is not a virgin, much less very pregnant. Or maybe this is how it really was, except no police have ever responded to a call that quickly.

I usually don't approve of comparisons between source material and film, but I can't prevent myself from doing it here. Selby Jr.'s novel presents some of the most violent, depraved images of desperation and hopelessness in literature. The book got under my skin and has stayed there through the years since I read it. The film, although distinctly stylized and directed with precision, fails to deliver the same kind of visceral impact. It is violent, but it is not violent enough. It is bleak, but it never approaches the hellish gloom of the source material. The performances are all impressive, and it is a polished piece of work overall. It just doesn't hit hard enough.

Hubert Selby Jr's novel of life and hard times in 1950's Brooklyn is a web of interconnecting stories involving work lock-outs, domestic violence and Jennifer Jason Leigh as local hooker. Despite some powerful scenes, there's too much self-importance in the narrative, no real perspective and a woeful lack of humour.