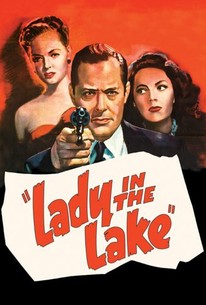 Lady in the Lake Photos

Robert Montgomery is the director and star of the film noir mystery Lady in the Lake, adapted for the screen by source novelist Raymond Chandler. Montgomery plays detective Philip Marlowe, a private eye who just wants to publish his own crime stories. Kingsby Publications editor Adrienne Fromsett (Audrey Totter) meets with Marlowe, but offers him a job as a detective instead of a writer. She wants him to find the missing wife of her boss, Mr. Kingsby (Leon Ames). (Adrienne wants them to proceed with their divorce so she can marry Kingsby herself.) Marlowe accepts the job and goes looking for clues at the home of the wife's sometime lover, Chris Lavery (Dick Simmons). When Marlowe gets knocked out and picked up for drunk driving, he decides to drop the case. He is drawn back in, however, when Adrienne suggests that Kingsby's wife is responsible for the murder of a mysterious lady in the lake. Lloyd Nolan and Tom Tully play two police detectives also on the case. Lady in the Lake is remembered as being filmed with a subjective camera -- almost entirely from Marlowe's point of view -- and subsequently hyped by an MGM ad campaign. ~ Andrea LeVasseur, Rovi

Robert B. Williams
as Detective

News & Interviews for Lady in the Lake

View All Lady in the Lake News

Critic Reviews for Lady in the Lake

...the movie is different, and one can hardly say that Lady in the Lake is anything less than entertaining for most of its running time.

Chandler's story, which might be his finest, somehow comes through this gimmicky filmmaking experiment intact enough though much scathed.

The subjective camera gimmick wears thin after a while. Montgomery is too light for Marlowe.

Audience Reviews for Lady in the Lake

Though the fist person point of view may be an annoying gimmick that slows down the plot, it's an interesting excercise with some sequences full of oppresive atmosphere and suspense, for instance when Marlowe discovers the body; also the car chase and the ending.

This has some great stuff in it, but it's too mediocre to give it really high marks. The POV stuff can be a bit on the boring and uninteresting side, which is why I think it failed a bit for me.

Tough little noir. The audience POV is a gimmick but not one that ruins the enjoyment of the film, actually what could have been dispensed with was when Montgomery shows up sporadically to provide info for the viewer which would have been better as a voice over. Totter is a great noir heroine, pretty but with a hardness to her features and attitudes that make her perfect for the genre.

"lady in the lake" is an amateurish noir by robert montgomery's gimmicky experiment of filmmaking with raymond chandler's novel by the same name. it utilizes the entire first-person perspective which is also applied in humprey bogart's "dark passage" which was also released around the same time in 1947. but montgomery's trial is thorough becuz montgomery's philip marlowe is basically just a narrator, a void awaiting to be filled by the audience. first of all, it takes a great deal of imagination as well as some enduring composure as a constant reader to visualize oneself in the position of philip marlowe as you're reading chandler's detective novels with his die-hard ace marlowe. as an enthusiastic reader of chandler's novels, i've found montgomery's primitive direction borders on my perception of the plots as i leaf one page after another. obviously, i cannot help but wonder whether montgomery's choice of such kind of directing is due to his limited craftmanship as a director since he cannot think any other way to present a movie? second of all, the process of film-viewing is a highly passive involvement with the original texts since the filmakers have filled in the pages with their own envisioning of the story. as a viewer, you're detached in a position to judge whether the fimmaker's presentation is marvellously creative or not with a smugly ignorant condescendence even you've not got in touch with the texts beforehand. but on the contrary, reading is an active experience or commitment to devote your absolute attention into the story, and you're more left alone with your own imaginations on the characters, backset and the stream of consciousness kind of soliloquy as the character's self-revelation...you concede into the author's viewpoint at the moment you open the book or you wouldn't dedicate your time and efforts on consuming all the materials..when you're reading, you're fabricating a movie made on your own with your mind in absolute privacy.... so "lady in the lake" is merely a passable movie-piece since the director cannot offer you anything more than a whirling camera with some bizarre hand gestures. but somehow it simulates your inward state as you read the original books while imagining yourself as marlowe and see things in his angle...meanwhile it also lacks a sort of deepening refinement of characters' dimensions which the book usually renders by monologues..in the case, it proves that audrey totter is indeed a good actress who could pull off an acting job by playing opposite to an abscent leading man, shedding tears to a lifeless machine without the helpful eye-contact in the love scenes.

Lady in the Lake Quotes