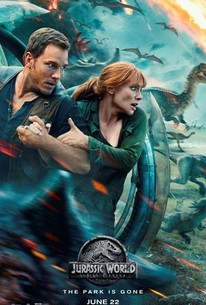 It's been three years since theme park and luxury resort Jurassic World was destroyed by dinosaurs out of containment. Isla Nublar now sits abandoned by humans while the surviving dinosaurs fend for themselves in the jungles. When the island's dormant volcano begins roaring to life, Owen (Chris Pratt) and Claire (Bryce Dallas Howard) mount a campaign to rescue the remaining dinosaurs from this extinction-level event. Owen is driven to find Blue, his lead raptor who's still missing in the wild, and Claire has grown a respect for these creatures she now makes her mission. Arriving on the unstable island as lava begins raining down, their expedition uncovers a conspiracy that could return our entire planet to a perilous order not seen since prehistoric times.

The 50 Highest-Grossing Movies of All Time: Your Top Box Office Earners Ever Worldwide
18 Rotten Movies We Loved from 2018
People’s Choice Awards 2018 Winners: Your Full List for Movies, TV, Music, and More

With all the behinds-the-scene stuff, you get lost. You just want to see dinosaurs trample stuff...still, the kind of summer film that you want.

Colin Trevorrow's belated follow-up to Jurassic Park is one of the most intriguing of recent reboots, since the premise of a theme park inhabited by actual dinosaurs directly dramatises the dangers of bringing the past back to life.

Golly, maybe life really will find a way, even in a franchise whose last installment played like a zombified version of the original entry from Steven Spielberg.

Fallen Kingdom is the silliest and most purely enjoyable variation on a story that a few big studio productions have been offering recently.

J.A. Bayona demonstrates a flair for the gothic... which has less pyrotechnics but more suspense.

A film located somewhere between arthouse and haunted house.

With a poignancy toward the original film shining from the start, Jurassic World: Fallen Kingdom is an entertaining summer blockbuster and an improvement to its 2015 predecessor.

A dull, formless affair that fails to deliver on any promise it may have had. It should be easy to make rogue dinosaurs work. Obviously, this isn't the case here.

All I know is I really didn't want to see crying, dying animals, whether they are made by nature or by man.

As impressive popcorn entertainment as "Jurassic World: Fallen Kingdom" is, well made and witty, too much of it just remains so, so predictable.

Fallen Kingdom is silly, that goes without saying. As it hurtles towards its inevitable conclusion, you'll probably find yourself wondering what the hell it even is, but damn it, it's a good trip while it lasts.

None of this paint by numbers nonsense gets the pulse going. This franchise has refused to evolve and the returns have notably diminished with every sequel. Let it die already.

While the tone is obviously darker and more ominous Jurassic World: Fallen Kingdom is nearly extinct with its inconsistent plot, forgettable characters and near-mirror-image of its previous sequel. Though Pratt and Howard command the screen with the brilliance of its CGI'd-prehistoric creatures it falls flat comparable even to its previous installment. 3.35/5

Where the park provided a sense of wonder for many films of the franchise, the latest installment just sends it all into fiery hell with a big volcano catastrophe. That's spectacular and with great special effects but even at this point already, the films tone is odd at times. Pratt's delivery has been more on point in other projects, but at least his chemistry with Howard works. The second half of the film, which combines the horror tropes of the lab and scary mansion with the dinosaurs feels like a very strange setting. I imagine few viewers signed up for Jurassic Mansion. There are a few Spielbergian thrills here or there and the film is entertaining in every second, but overall, the title almost feels like false advertisement.

Not a direct steal from the first Jurassic but rather let's just say that quite a few scenes from the original have been, er, creatively restructured. The summer blockbuster still remains with plenty of big action set pieces to chew popcorn with the best of them - although this isn't one of the best of them. They did well enough to keep the series alive (because that's their intention), but you won't be running to your chums and telling them that they've got to see this movie.