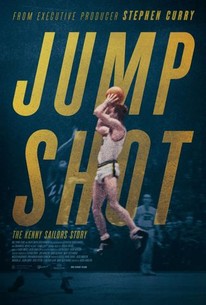 "Jumpshot" uncovers the inspiring true story of Kenny Sailors, the proclaimed developer of the modern day jump shot in basketball, and how the zenith of our lives doesn't end in our athletic prime. Introducing this never before seen "leaping one-hander" to the masses on a national level Kenny quickly grew to be a fan favorite while leading his Wyoming Cowboys to the Collegiate National Championship in Madison Square Garden in the 1943. But after playing on several losing teams in an unstable, emerging league now known as the NBA, Kenny disappeared into the Alaskan wilderness only to be forgotten by the sport he helped pioneer. Now, nearly sixty years later, the multitude of people he has touched along the way have forced Kenny's humble reemergence. This film will follow Kenny's supporters' ongoing efforts to not only get him in recognized in the Naismith Hall of Fame, but also, to uncover the man behind the shot and why the sport he helped define never defined him. Featuring Steph Curry, Kevin Durant, Dirk Nowitzki, Jay Bilas, Clark Kellogg, Bob Knight, Lou Carneseca, Kiki Vandeweghe, Nancy Lieberman, Chip Engelland, Tim Legler, Fennis Dembo, David Goldberg and a host of other basketball and sport legends!

There's something so compassionate and warm about Jacob Hamilton's Jump Shot, a film that is on one level about the history of basketball but is really more about legacy and impact.

Jump Shot does a remarkable job blending photographs, animations, and interviews to tell the touching story of a simple man whose amazing life continues to influence people to this day.

Jump Shot offers us an engaging glimpse at a largely forgotten piece of sports history. The story of Kenny Sailors, both as a ballplayer and as a man, is one that deserves to be told.

This story, about a genuinely good man, is the perfect film for a sports-starved audiences during the quarantine.

Jump Shot﻿ is an important basketball history lesson, shining a light on one of the game's unsung heroes who deserves more recognition.

It is a love story, and it is a story of a quality we do not see very often, decency.

More than just a simple sports documentary, "Jump Shot: The Kenny Sailors Story" is a revealing, heartwarming look at a man who lived fully and unapologetically for others...

Hamilton does a great job not only educating us about Kenny's impact on basketball and his career, but also gives us a window into what kind of man he was.

Jumpshot: The Kenny Sailors Story uncovers two facts that's long been apparent: Kenny Sailors invented the modern jumpshot and he was a singular and amazing man.

[Kenny Sailors] deep love of his sport helps to make the film accessible even to those whose knowledge of it is limited. For basketball fans, the film is a must.

Jumpshot is a love letter from Steph Curry, the State of Wyoming and all those players yet to come who will now know the origin of the greatest move to ever be introduced to the game of basketball.

With archival footage from college basketball games in the 1940s and pro ball in the 1950s, Hamilton illustrates how much Sailors seemed like a time traveler from the future.

There are no featured reviews for Jump Shot: The Kenny Sailors Story at this time.