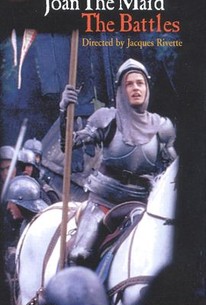 Jacques Rivette directed this richly detailed six-hour drama based on the story of Joan of Arc. In Part one, "Les Batailles," Jeanne the Maid (Sandrine Bonnaire) leaves her childhood home in Domremy after hearing what she is sure was the voice of God. She believes that she can help lead France to victory on the battlefield, and she persuades Charles, dauphin of France (Andre Marcon) to allow her to guide his troops. Part two, "Les Prisons," concerns the sad aftermath of Jeanne's defeat at Orleans. Jeanne is sent to prison, where in two separate trials she is tried for heresy and impersonating a man, with both her life and the sanctity of her mortal body at stake. A four-hour version, with each of the two parts trimmed down to two hours, is also available.

Sandrine Bonnaire
as Joan of Arc

Reginald Huguenin
as Colet of Vienne

Joan the Maid, like many Rivette films, can be intimidating. Get past the length, and you may still need to acclimate to the movie's vision of a thoroughly mortal Joan, in addition to an aesthetic that is wholly presentational.

There are no featured reviews for Joan the Maid 1: The Battles (Jeanne la Pucelle I - Les batailles) at this time.