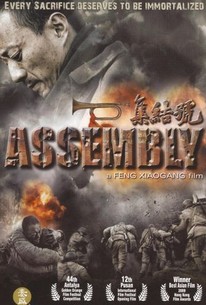 A veteran of China's Civil War rails against modern bureaucracy in hopes of finally receiving recognition for his bravery and to honor the memory of his fallen comrades in director Feng Xiaogang's big-budget war drama. The year was 1948, and the fighting between the Nationalist KMT and the Communist PLA is raging. In a small, northeast China town, Captain Gu Zidi (Zhang Hanyu) leads the Ninth Company in a fierce skirmish against the a rapidly weakening KMT unit. His blood boiling over the death of a political officer in battle, Captain Gu vengefully kills a KMT soldier despite the fact that the leader and his unit have just surrendered. Imprisoned for a few short days as a sort-of token gesture, Captain Gu makes the acquaintance of imprisoned political officer Wang Juncun (Yuan Wenkang, who has just been accused of cowardice and will likely receive the death penalty. Later, when Captain Gu is ordered to take the Ninth out on a dangerous mission, he requests that Wang join the brigade in battle. Unfortunately for the majority of the squad, the KMT forces are much more substantial this time around, and though a few men claim to have heard the signal for retreat, Captain Gu commands them to stand their ground: In the aftermath of the slaughter, Captain Gu is the last man standing. Still, the valiant soldier stages a remarkable recovery, and goes on to save the life of North Korean Er Dou (Deng Chao) during a battle against the Americans and South Koreans. A few years later, Captain Gu enlists the aid of Er Dou and Wang's widow in regaining his honor, and ensuring that his fellow soldiers didn't die in vain.

Phil Jones
as US Army Captain
View All

"Dutiful" might be the best term to describe Assembly, as it never rises above a general competence of vision.

The captain of a squad who were wiped out defending a crucial position during the Chinese civil war suffers survivor's guilt and obsessively sets about trying to find their bodies and prove their heroic sacrifice. Assembly is very similar in both style and substance to Korean war film Brotherhood. It too centres around the discovery of fallen soldiers and representing their bravery in some brutally realistic battle sequences. It also shares the same strengths and witnesses of Je-kyu Kang's film in that it relies slightly too much on melodrama and manipulation for its characterisation despite the impressively epic scale of the surrounding violence. The battle scenes are very much from the Saving Private Ryan school, realistically recreating the horrors of war but the characters themselves get a little lost amidst all the flying masonry and body parts meaning that it's difficult to form any emotional connection to them, leaving the rest of the film lacking the context and resonance it really needed. Visually it is very impressive indeed however, making for a well performed and well intentioned film that's worth seeing for its sheer spectacle alone.

Xiaogang Feng's Assembly is to China as to what Saving Private Ryan is to America. I'm not saying that they are the same because they are quite different. I'm just saying that it is a nicely written popular war film in China. It is good everywhere else in the world too.

This movie comes in two parts. The first hour is an all out bloody war movie. The pace is rather quick and it is intense. It makes you wonder why the first hour isn't dragged out to make the entire film because it can be. Nonetheless, war movie fans will enjoy this half.

The second hour takes a huge turn and it becomes a historical war drama. Yes, it can be slow and boring for the fans of explosions, but the writing is what makes this second half as good as it is. The main character buildup for Gu Zidi in the beginning is more than enough to get you to follow him as the years pass, which eventually leads to an emotional and great conclusion.

The action scenes in the first half are fantastic. They are bloody, as they should be, and they come in bunches.

I can't say enough about how good Hanyu Zhang is at leading this picture. He literally carries this film on his shoulders. The supporting cast isn't that bad either.

Assembly will fool some into thinking that it is an all out war epic, when it truly isn't. The first half will entertain, while the second will bore those that can't come to appreciate a historical drama.

A brilliant movie coming from China. It's to the Chinese civil war what Saving Private Ryan was for World War II in terms of gritty cinematography, a story of heroism and perseverance as well as brilliant acting and scoring. The movie is a class-act enterprise and you find yourself so enthralled by every minute of it. From beginning to end, the film is beautiful to watch and sumptuous in its design. The ambitious project pays off in more than just grandeur. The story at the core is one of utter redemption and a fight for more than land or a belief system. It's ultimately about the fight for what's right and for justice in the eyes of future generations. Really a must-see.