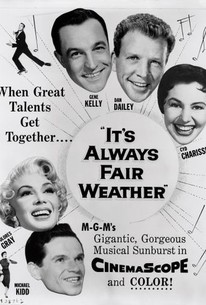 Cooked up by Betty Comden and Adolph Green, It's Always Fair Weather could well have been titled On the Town Ten Years Later. Like 1949's On the Town (also a Comden/Green collaboration), this MGM musical follows the exploits of three servicemen buddies, played by Gene Kelly, Dan Dailey and Michael Kidd. The difference here is that the threesome has just been discharged from service. The boys agree to get together again exactly ten years after their parting. Flash-forward to 1955: Kelly, who'd dreamed of being a show biz entrepreneur, is a small-time boxing promoter, heavily in debt to the Mob; Dailey has abandoned his plans of becoming an artist in favor of a stuffy, grey-flannel existence as an ad executive; and Kidd, who'd aspired to being a master chef, is running a modest diner. On behalf of TV-personality Dolores Gray, network-staffer Cyd Charisse contrives to reunite the three men on a This is Your Life style TV special, but all three are hostile to the notion.

Harry Wilson
as Butch
View All

The lively musical comedy has splendid dancing, but the story is not so splendid.

A disappointment. Ordinary musical from the end period of the great MGM muscials. Gene's number on roller skates is memorable but everything else is just so much filler.

Gene Kelly is great at being an adorable cad who has a thousand times more potential than he expends. I think that is because he is/was one in real life. It's got a little more of an edge than usual MGM tapdancing spectacles and I think they made a little bit more of a effort in attaining originality in the dance numbers - with the garbage can pails and the ROLLERSKATES (ohh my gosh). I only wish Cyd Charisse had danced in more numbers. I still say she and Gene Kelly have the best dancing chemistry - she's such a gazelle and he's such a kloofing klomphing dreamboat. The ending was a dream. I love that these movies mandatorily have to end happily.