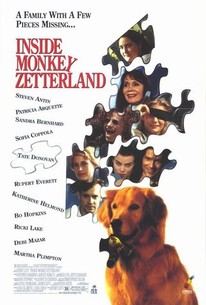 Actor Steven Antin wrote the screenplay, and U.S.C. film professor Jefery Levy directed this self-absorbed trifle about a self-absorbed screenwriter and his nutty family and friends. Antin plays Monkey Zetterland, an innocuous young man who is trying to work on his screenplay -- something having to do with the defunct Los Angeles streetcar system -- while a collection of relatives, friends, and neighbors continually interrupt him. His family is a collection of personified neurosis: there is Honor (Katherine Helmond) a soap-opera actress with hemorrhoids who is afraid of being fired; Grace (Patricia Arquette), his lesbian sister who is crestfallen to find that her lover Cindy (Sofia Coppola) is pregnant; brother Brent (Tate Donovan), an anal hairdresser with his elbow constantly bent over a cell phone; and Mike (Bo Hopkins), his Dad, who shows up for Thanksgiving dinner with his pet parrot. But his neighbors are no better: Imogene (Sandra Bernhard) screams to him, "I love you, Monkey Zetterland!"; Daphne (Debi Mazar) complains that Monkey doesn't spend enough time with her; Sofie (Martha Plimpton) and Sasha (Rupert Everett) are a pair of terrorists devoted to blowing up insurance companies that deny insurance policies to HIV-positive patients; and Bella (Ricki Lake), a crazed fan of Monkey's mom.

Critic Reviews for Inside Monkey Zetterland

So odd that it's mesmerizing.

Audience Reviews for Inside Monkey Zetterland

There are no featured audience reviews yet. Click the link below to see what others say about Inside Monkey Zetterland!