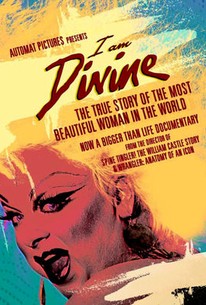 Critics Consensus: With warmth and affection, I Am Divine offers an engaging portrait of the complex personality behind a trailblazing cinematic figure.

Critics Consensus: With warmth and affection, I Am Divine offers an engaging portrait of the complex personality behind a trailblazing cinematic figure.

Critic Consensus: With warmth and affection, I Am Divine offers an engaging portrait of the complex personality behind a trailblazing cinematic figure.

I Am Divine Photos

Young, chubby Harris Glenn Milstead liked musicals, was drawn to feminine pursuits, and was bullied. He was privately playing "dress-up games" in his mother's clothes. By 1963, Glenn was brave enough to show up at a party with his then girlfriend dressed as an astonishingly passable Elizabeth Taylor, among the many glamorous stars he openly idolized. (c) Official Site

News & Interviews for I Am Divine

Critics Consensus: The Counselor is Eccentric but Uneven

View All I Am Divine News

Critic Reviews for I Am Divine

The interviewees and even his mother, with whom he was reconciled late in his life, all portray him as a generous and very sweet-natured man.

Schwarz offsets the camp with a sincere appreciation of both the obvious, larger-than-life personality and this performer's oft-overlooked skills ...

I Am Divine riffs entertainingly through the career of the drag star who blazed in Pink Flamingoes and Hairspray.

A glimpse of a surprisingly shy and gentle soul who longed to be a star.

It's hard to go wrong with a movie about famed drag queen Divine, and director Jeffrey Schwarz certainly doesn't in "I Am Divine," a serious documentary about this gloriously trashy trailblazer.

While it serves as a wonderful preface to Divine's notable body of work, it's equally enjoyable to revisit the infamous, intriguing, and incomparable career of a star whose life ended much too soon.

I Am Divine is a thoroughly optimistic and exuberant celebration of life that quashes any myths about transvestism and reveals a side to the icon, that had been previously unseen.

This is the film that Divine deserves.

Dominic Mill
We Got This Covered

It's surprisingly moving stuff - dressed up with just enough archival outrage to remind you how scandalous Divine once seemed.

This is, for the most part, a celebration of Divine's life unencumbered by guilt or oppression.

Audience Reviews for I Am Divine

This is an efficient and enjoyable documentary about the life and career of John Waters' muse of filth, even though it feels excessively reverential and has a structure that is a bit too conventional - which seems pretty ironic, considering the unconventional subject in question.

A thorough and compassionate exploration of an enigmatic yet wonderfully eccentric individual, I Am Divine has plenty to say about identity, fame, and self-respect.

The life of Glen Milstead, from a chunky effeminate nerd who got beat up at school to the iconic, outrageous and obscene 300 lb drag queen Divine, the main attraction in John Waters' transgressive early comedies. The reverential interviews and clips meet, but don't exceed, your expectations for a documentary about Divine.

Very good documentary on famed drag queen Divine, featuring well conducted interview with those who knew him and worked with him, this is an entertaining film, one that is quite different than your normal documentary because of its subject, and it's quite refreshing as well. For its run time, I Am Divine is quite entertaining and it's a documentary that is entertaining from start to finish. Although good, I found the film a bit lacking because it's for me a bit too short for a documentary and it feels like it rushes too fast with its subject. Despite this, I Am Divine is good for what it is, and for viewers interested in the Divine, I guess that this will surely appeal to viewers who have enjoyed John Waters' work as well As fans of Divine. For what it is, it's a good documentary, but to be honest, I expected a bit more as well. The film manages to go into its subject well enough to establish who is Divine, but you are left wanting a bit more as well. Nonetheless, the interviews are well done, and there are enough effective moments in this documentary to warrant a recommendation, but for those interested in the famed drag queen, this may or may not offer what you're looking for. I Am Divine is entertaining, bizarre and well crafted, but at times it could have been better than what is presented here. I enjoyed the film, but I wanted more as well. But as a whole, for fans of Divine, this is well worth seeing despite its shortcomings.

I Am Divine Quotes