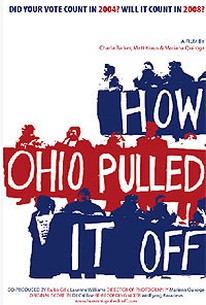 The 2004 American presidential elections had the entire country on the edge of their seats, and with the 2008 elections looming ever closer on the horizon filmmakers Charlie Barker, Matthew Kraus, and Mariana Quiroga ponder the possibility of future election fraud and its potential threat to the foundation of western democracy. When the 2004 elections came down to one state, Ohio, everyone began to suspect that the system had been corrupted. In the aftermath of the election, it appeared to many that the election had been stolen outright. What really happened in Ohio back in November of 2004? From the controversial election to the public outcry that followed, this film takes a closer look at the actions taken by citizens who protested in the streets and revitalized the voting rights movement, as well as the disquieting sense of uncertainty concerning future elections.

Critic Reviews for How Ohio Pulled It Off

There are no critic reviews yet for How Ohio Pulled It Off. Keep checking Rotten Tomatoes for updates!

Audience Reviews for How Ohio Pulled It Off

There are no featured audience reviews yet. Click the link below to see what others say about How Ohio Pulled It Off!

How Ohio Pulled It Off Quotes