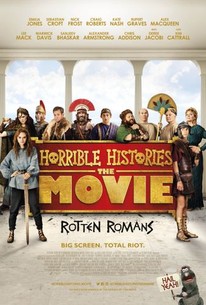 Who are the Celts? What have the Romans ever done for us? And why is Emperor Nero dousing himself in horse wee? Friends, Romans, Celts... Lend us your ears. The all-conquering Romans rule the civilised world -- and that includes "the stain" that is Britain. While the young Emperor Nero must battle his scheming mother Agrippina for ultimate power, Celt queen Boudicca gathers an army in Britain to repel the rotten Romans. Mixed up in this battle for liberation are the teenage Atti, a reluctant Roman soldier, and Orla, a young Celt with dreams of becoming a warrior like Boudicca. Will they fall on opposite sides or forge a friendship in the chaos of Celtic-inspired rebellion?

The tunes aren't particularly catchy, the outfits aren't that over the top, and the fart jokes, well, stink.

As light and silly as Horrible Histories can be, there's a subversive quality to it, too.

It is contrived - no longer based around real, erm, history - and less horrible; most of the deaths happen off-camera, presumably to secure a PG rating.

Destined to form an idle televisual backdrop while families one day slip into a Yuletide coma, it ain't horrible, but it ain't historic, either.

Whenever the jokes wear thin we fall back, a little vertiginously, on the two best performances.

The gag quotient is high, even if the hit-rate is middling.

Horrible Histories never escapes the sense of feeling more like a feature-length TV special than a movie.

It might distract young kids handily enough, but for your own sanity, just introduce them to Monty Python instead.

Writers Jessica Swale, Giles Pilbrow and Caroline Norris keep up a relentless gag rate and the performers rise to it admirably.

The film lacks the punchy hit rate of gung-ho gross-out that made the series such a deliciously uncouth pleasure.

With Craig Roberts and Kim Cattrall catching the eye as Nero and Agrippina, it's a solid IV stars from me.

There are no featured reviews for Horrible Histories: The Movie - Rotten Romans at this time.