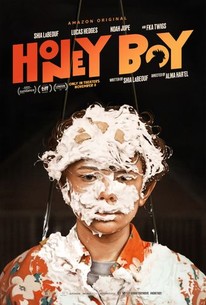 Critics Consensus: Honey Boy serves as an act of cinematic therapy for its screenwriter and subject -- one whose unique perspective should strike a chord in audiences from all backgrounds.

Critics Consensus: Honey Boy serves as an act of cinematic therapy for its screenwriter and subject -- one whose unique perspective should strike a chord in audiences from all backgrounds.

Critic Consensus: Honey Boy serves as an act of cinematic therapy for its screenwriter and subject -- one whose unique perspective should strike a chord in audiences from all backgrounds.

From a screenplay by Shia LaBeouf, based on his own experiences, award-winning filmmaker Alma Har'el brings to life a young actor's stormy childhood and early adult years as he struggles to reconcile with his father through cinema and dreams. Fictionalizing his childhood ascent to stardom, and subsequent adult crash-landing into rehab and recovery, Har'el casts Noah Jupe and Lucas Hedges as Otis Lort, navigating different stages in a frenetic career. LaBeouf takes on the daring and therapeutic challenge of playing a version of his own father, an ex-rodeo clown and a felon. Artist and musician FKA twigs makes her feature acting debut, playing neighbor and kindred spirit to the younger Otis in their garden-court motel home. Har'el's feature narrative debut is a one-of-a-kind collaboration between filmmaker and subject, exploring art as therapy and imagination as hope.

Natasha Lyonne
as Mom
View All

A movie that could easily have crashed and burned. That it does not has something to do with the shared intensity of character and performance. All three main actors share the stage as equals and the level of commitment is remarkable.

Playing out mainly in the skid-row motel in Los Angeles where father and son live, Alma Har'el's dreamlike film leavens the grimness with humanity and humour...

This is bleak stuff. But it's also hellishly entertaining.

The film delicately bears its scars and finds peace by acknowledging how childhood pains can make and break us.

This looks on paper like a self-aggrandising vanity project, but it is very well directed and performed.

The icing on the cake of [LaBeouf's] indie redemption phase.

With Honey Boy, a PTSD therapy session masquerading as a semi-autobiographical drama, LaBeouf offers a snapshot into the helter skelter ride that was his expedited childhood.

Written as a therapy exercise by actor Shia LaBeouf, as a part of his rehabilitation program, Honey Boy is an autobiographical tale that has the queasy qualities of a Catholic confession.

A moving exploration of art, trauma and the connection between the two.

The movie feels very raw. LaBeouf's voice is very unfiltered through this movie... You can tell that he's working through things as he writes the movie.

Honey Boy is a messy triumph for screenwriter LaBeouf and director Har'el.

There are no featured audience reviews yet. Click the link below to see what others say about Honey Boy!