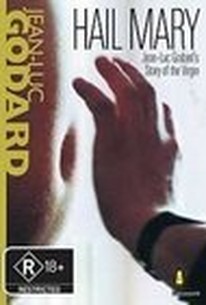 Hail Mary is Jean-Luc Godard's first sustained examination of modern spiritual life. This complex episodic film parallels the story of a contemporary Joseph (Theirry Rode) and Mary (Myriem Roussel) with that of a science class studying the origins of life on earth. Joseph is a cab driver and Mary plays on a woman's basketball team. A thuggish angel (Philippe Lacoste) tells Mary that she is with child. When she tells Joseph that she is pregnant, he accuses Mary of having cheated on him. The professor of the science class (Johan Leysen), who is having an affair with one of his students (Anne Gauthier), presents the theory that life came to earth from somewhere else in the universe. Godard organizes scenes from these two narratives into an essay about the relationship between the spirit and the body, and how being is born from nothingness. The film is filled with images of light cascading over the Swiss countryside. Godard often has his cinematographers Jean-Bernard Menoud and Jacques Firmann shoot directly into the sun and capture ravishing shots of pure luminosity. Hail Mary is introduced by a short film by Godard's frequent directing partner Anne-Marie Miéville entitled The Book Of Mary, the story of a young girl named Marie whose parents separate. Miéville's film continues the philosophical reflection on children that she and Godard started in Numéro deux(Number Two). ~ Louis Schwartz, Rovi

Anne Gautier
as Eva
View All

This much is certain: The controversy will probably sell a lot more tickets than is warranted by the comparatively solemn, unsensational nature of the film itself.

No longer content with a materialist analysis of the state of the world, he's attempting here to film the intangible.

The film is not very good. People who have not seen a lot of films by Godard will find it especially slow-moving.

[S]een alongside Godard's other films, Hail Mary isn't that shocking. It's a film of great sensitivity and yearning[.]

Hail Mary is limpid, serene, and, for all the pubic hair on display, glowingly chaste.

fascinating stuff that is beautifully photographed

By updating the story of the Virgin Mary, Godard produced, as the critics billed it, 'the most controversial film of our time,' and for once the advertisements exaggerated only slightly.

An offbeat movie for which I'm too intelligent to grasp the spiritual story it's supposed to convey. Gave up after trying (& tolerating with patience) for half-an-hour.