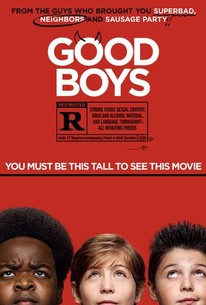 Critics Consensus: Good Boys is undermined by an eagerness to repeatedly indulge in profane humor, but its appealing cast and ultimately thoughtful message often shine through.

Critics Consensus: Good Boys is undermined by an eagerness to repeatedly indulge in profane humor, but its appealing cast and ultimately thoughtful message often shine through.

Critic Consensus: Good Boys is undermined by an eagerness to repeatedly indulge in profane humor, but its appealing cast and ultimately thoughtful message often shine through.

After being invited to his first kissing party, 12-year-old Max (Room's Jacob Tremblay) is panicking because he doesn't know how to kiss. Eager for some pointers, Max and his best friends Thor (Brady Noon, HBO's Boardwalk Empire) and Lucas (Keith L. Williams, Fox's The Last Man On Earth) decide to use Max's dad's drone -- which Max is forbidden to touch -- to spy (they think) on a teenage couple making out next door. But when things go ridiculously wrong, the drone is destroyed. Desperate to replace it before Max's dad (Will Forte, The Last Man on Earth) gets home, the boys skip school and set off on an odyssey of epically bad decisions involving some accidentally stolen drugs, frat-house paintball, and running from both the cops and terrifying teenage girls (Life of the Party's Molly Gordon and Ocean's Eight's Midori Francis).

Will Forte
as Max's Dad

Overall the movie delivers on its premise.

Some of this is fun and inventive, some of it repetitive and feeble, especially the heavy emphasis on the naivety of the protagonists and the hopelessness of their attempts at cool.

This might be my favorite studio comedy of the year.

The movie's charm comes from its ability to conjure up the innocence of the twilight of childhood; its humor arises from the adult perspective of certain not-so-innocent things. Good Boys may not be for everyone but my funny bone was tickled.

For all its wacky, gross-out, shock-ya humor, Good Boys has a lot of heart.

Good Boys takes chances that you don't see too often on film, which ultimately makes it a really good time.

In all its r-rated glory, there is simple pureness of innocence hidden in plain sight.

Since the first scene, there's no doubt these three are great friends: the boys are hilarious together. [Full review in Spanish]

Good Boys is a remarkably funny attempt to take the typical teenage quest movie and drop its range down into the tweens. Think of it as Superbad Babies.

'Good Boys' misses its mark, but manages to land in the end.

It's very funny, very raunchy...it's nothing you haven't seen before, but the jokes are delivered with freshness...the shock value is crazy...

There are no featured audience reviews yet. Click the link below to see what others say about Good Boys!