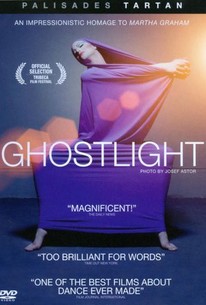 For his feature debut, writer/director Christopher Herrmann chose a subject near and dear to his heart. Herrmann had been the biographer and a close friend of renowned choreographer Martha Graham before the dance legend passed away in 1991 at the age of 96. With Ghostlight, Herrmann pays tribute to Graham by recreating the events that preceded +Phaedra. Graham is portrayed by drag queen Richard Move (who also co-wrote the script), and Ann Magnuson plays Barbara Rosen, a filmmaker who is permitted to document the process of bringing +Phaedra to the stage. Deborah Harry and Mark Morris appear as themselves in cameo roles. Ghostlight screened at the 2003 Tribeca Film Festival.

Mark Morris
as Himself

Deborah Harry
as Herself

Few performances are hardy enough both to blossom in the dark intimacy of live theater and bloom under the glaring eye of a movie camera. Ghostlight is not the exception.

Achieves substance as a historical document, an homage, an appreciation of the axis of empathy shared between larger- than-life women and the (frequently) gay men who venerate them.

A bizarre and campily amusing 'tribute.'

Real history and raunch poke through, but the thirtysomething Move is too vital to be Martha in her dotage.

An affectionate, witty tribute which also happens to be one of the best films about dance ever made.

It's a good-hearted dream of a film made all the more fascinating by virtue of its willful weirdness.

Even knowing [Move is] nearly a foot taller and considerably more robust than the real Graham, his performance is so completely realized that it radiates its own synthetic truth.

There are no featured reviews for Ghostlight at this time.