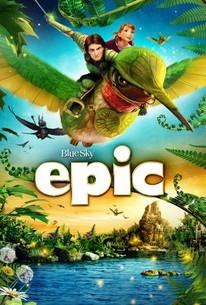 Critics Consensus: Though its narrative themes are all too familiar, Epic is beautifully animated and crafted with just enough flair to make for solid family entertainment.

Critics Consensus: Though its narrative themes are all too familiar, Epic is beautifully animated and crafted with just enough flair to make for solid family entertainment.

Critic Consensus: Though its narrative themes are all too familiar, Epic is beautifully animated and crafted with just enough flair to make for solid family entertainment.

EPIC is a 3D CG adventure comedy that reveals a fantastical world unlike any other. From the creators of ICE AGE and RIO, EPIC tells the story of an ongoing battle between the forces of good, who keep the natural world alive, and the forces of evil, who wish to destroy it. When a teenage girl finds herself magically transported into this secret universe, she teams up with an elite band of warriors and a crew of comical, larger-than-life figures, to save their world...and ours. -- (C) Fox

Christoph Waltz
as Mandrake
View All

For all its attempts at wonder and spectacle and play, Epic is mostly a slog.

Although the basic story is too juvenile and simplistic to entertain anyone with an age in the double-digit range, the themes and underlying ideas are too complicated to capture the attention of someone younger.

Director Chris Wedge falls into the common animator's trap of making the "human" characters a lot duller than the nonhuman creepy-crawlies.

With its array of goofy sidekicks (Aziz Ansari as a slug almost runs away with the whole picture) and carefully crafted relationships, Epic certainly manages to tell a compelling tale.

A 3D eco-fantasy whose mantra-like insistence that we're all connected by nature is one of the main things that underscores the abject insincerity of the sentiment as the movie articulates it, "Epic" is very nearly epic in its stifling mediocrity.

Won't take up much space in the history books but will make a very nice footnote.

Knowing the state of the animation industry, and how artists and animators put their hearts and souls into their craft, hoping to create something truly special, makes this end result very disappointing indeed.

With the laughs scarce, it's left to the story to enchant and regrettably Epic was always going to lose the fight against its hyperbolic title.

[Epic] gets trapped sometimes by its tropes...but overall, it's lovely to look at, nicely structured and a pleasant way to pass the time if animated fairy wars are of interest.

Epic does contain enough enjoyable elements to stave off boredom, but there is much more original fare out this year for the kids to enjoy.

... an overflow of creativity and technical advances. [Full review in Spanish]

The 3-D digitally animated Epic is bursting at the seams, much like the lush forest where it's set.

From the Studio that gave us the 'Ice Age' franchise comes this bug sized eco friendly kids flick. Based on yet another children's story book and with the strong hint of more to come in a franchise builder...oh geez! The plot is pretty unoriginal really and we've similar stories in other films. A young girl is shrunken down to the size of a bug and is accidentally throw into a bug sized war between human-like warriors and orc-like creatures. All of this takes place within a regular forest in the regular world near the young girls house. So basically its a bug war kicking off in your back garden right under your nose. Not quite sure why the film is called 'Epic' when the book isn't but there you go, I guess because of the scale of the war going on? Anywho I'm gonna come right out say I really liked this film, I dug it, its totally cliched and completely formulaic but it works well. Pretty much all the characters are likeable and well rounded, again most of them we've seen before in other animated films, nothing too special about talking snails, slugs, flies etc...its been done, but it looks good and is nicely amusing at times. This is the main focal point of the film, the visuals. Like many animated films these days it looks tremendous I kid you not, both worlds we see, human and bug, are awesome in spectacle. When we are introduced to the bug sized world its one of those moments when you say to yourself 'I could live there, I want to live there, it looks fun'. Everything looks so lush and green, so vibrant and colourful, its really gorgeous and such an eye opener. On the flip side the baddie bug sized world is also awesome in its murky, rotten, dark, fungi, dead tree filled way, not exactly ground breaking stuff though. These visuals also extend to the characters, the good guys are a green armour clad humanoid warrior race called Leaf Men. Now this guys look so flipping cool, their armour is a lovely leaf plated design with intricate pattern etched into the plates, they carry swords, wear gladiator style helmets and ride on the back of green/blue hummingbirds, their steeds of choice. They basically look like eco warrior samurai and their leader voiced nicely by Colin Farrell is called 'Ronin', which of course you all know is another word for samurai (without a master). The Irish samurai. There are also you're standard sidekick type creatures as with any animated kids flick. Here they are nothing original in the form of a snail and a slug but I gotta give kudos to the voice actors because these two guys are very amusing, and kinda adorable looking. They have an awesome amount of detail on them though, really look good. The bad guys are kinda like orcs I guess although their heads look a bit like a sharks head, they are called Boggans. They are you're typical baddies, they don't talk they just grunt n roar, they are drab coloured and all look the same. But there are various types of bad guys, basically any creature or bug that you would deem scary or has a bad reputation is classed as a bad guy. Bullfrogs, mosquitoes, spiders, crows, bats etc...all baddies. On the flip side you have various creatures that are classed as goodies like snails, slugs, glowworms, hummingbirds etc...There are also various plant/flower creatures in the form of Daisy's, Thistles, Dandelions etc...most of these makeup background characters. One thing, all the characters in this are errr...white people, accept for the Queen, who is black, why? Just seemed rather odd to me to have just one character stand out from the rest like that. Unfortunately the Queen is voiced badly by Beyoncé Knowles which doesn't help either, just doesn't sound right or match her character at all. In all honesty the film is all about the visuals as the plot is highly generic. You know what's gonna happen as we've seen this type of thing a gazillion times over. The main female character is cute looking and does everything as you would expect, although she takes to this new world pretty quickly, I'm sure most would be freaked out for ages. Much like the main villain who also does everything you would expect and gets his comeuppance predictably. Its all very light vs dark, all the goodies are colourful and bright, all the baddies are dark, gloomy and shadowy. So yeah its all very obvious but its still a fun time with some stunning visuals. The finale is quite epic in scale and does lock you in for sure, does seem to be copying 'Star Wars' a wee bit but hey its cool. The film does slyly use other film influences throughout no doubt. Steve Tyler's glowworm character does seem to have been plucked from 'Alice in Wonderland' if you ask me, Tyler's vocals also sound like they have been plucked from said Disney film spookily, good voice work actually, surprising. I think you can tell from what I've written here this is a character based flick, there are many other fun characters in here also. Fun characters, well crafted details and overall delicious visuals, shame about the by the numbers story line...but still fun!

Truth in advertising would demand a title change, something more appropriate like: "not quite as epic as we would have you believe". Yah sure, unbelievably eye-popping animation, but the story doesn't allow for anything deeper than mere character introduction. The action happens but you'll hardly give two shiny pennies. Yer grammar school children won't feel gypped but you'll be looking out the window. Is the neighbor taking out the trash this time of day?

Funny, and very entertaining. The animation is excellent, it has an interesting Bug's Life-inspired story line, and is a really good movie that the entire family would enjoy...