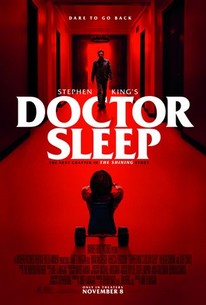 Critics Consensus: Doctor Sleep forsakes the elemental terror of its predecessor for a more contemplative sequel that balances poignant themes against spine-tingling chills.

Critics Consensus: Doctor Sleep forsakes the elemental terror of its predecessor for a more contemplative sequel that balances poignant themes against spine-tingling chills.

Critic Consensus: Doctor Sleep forsakes the elemental terror of its predecessor for a more contemplative sequel that balances poignant themes against spine-tingling chills.

"Doctor Sleep" is the continuation of Danny Torrance's story 40 years after the terrifying events of Stephen King's The Shining. Still irrevocably scarred by the trauma he endured as a child at the Overlook, Dan Torrance has fought to find some semblance of peace. But that peace is shattered when he encounters Abra, a courageous teenager with her own powerful extrasensory gift, known as the "shine." Instinctively recognizing that Dan shares her power, Abra has sought him out, desperate for his help against the merciless Rose the Hat and her followers, The True Knot, who feed off the shine of innocents in their quest for immortality. Forming an unlikely alliance, Dan and Abra engage in a brutal life-or-death battle with Rose. Abra's innocence and fearless embrace of her shine compel Dan to call upon his own powers as never before-at once facing his fears and reawakening the ghosts of the past.

Rebecca Ferguson
as Rose the Hat

Nicholas Pryor
as Eddie
View All

"Doctor Sleep" feels like the logical continuation to Stanley Kubrick's adaptation of "The Shining."

Whichever route you prefer to take to the Overlook Hotel, there are better directions available than those prescribed by Doctor Sleep.

I think what I respected the most about Doctor Sleep is that it does feel like it's trying to be its own film for as long as it can.

An itch to play a few too many of the greatest hits softens the impact of the ride. But make no mistake: "Doctor Sleep" shines.

From the opening shots and synth notes to a spectacularly chilling closing scene, Doctor Sleep makes a convincing case for its own greatness.

McGregor is certainly skilled enough to make Dan compelling, even if the journey and its twists aren't always embraceable.

This one might leave you a bit more energized and hopeful than the Kubrick film. Kubrick had no problem showing us what happens when the Shine goes out. Flanagan seeks to do the opposite: Maybe, the film argues, we'll all Shine on.

The cast was phenomenal, the story itself was just very invigorating and full of plot twists.

In place of what Doctor Sleep puts its condescending, blinded faith in, I sympathize with Jack, and Dan - or Danny - I'd rather cling to drink or ghosts.

Even if Flannagan is talented enough to master the dolley shots, zoom-outs and set designs, what's impossible to mime is [The Shining's] larger-than-life atmosphere, the overwhelming feeling that comes from great storytelling.

A very well-paced film considering the 40-year gap from the original...it really felt like a great complimentary piece.

There are no featured reviews for Doctor Sleep at this time.