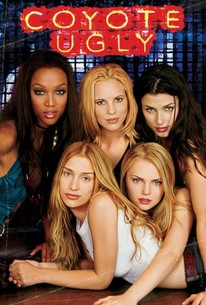 Critics Consensus: Coyote Ugly has an enthusiastically trashy energy and undeniable aesthetic appeal, but it's nowhere near enough to make up for the film's shallow, unimaginative story.

Critics Consensus: Coyote Ugly has an enthusiastically trashy energy and undeniable aesthetic appeal, but it's nowhere near enough to make up for the film's shallow, unimaginative story.

Critic Consensus: Coyote Ugly has an enthusiastically trashy energy and undeniable aesthetic appeal, but it's nowhere near enough to make up for the film's shallow, unimaginative story.

An aspiring musician becomes one of the most famous bartenders in New York in this high-spirited comedy-drama. Small-town girl Violet Sanford (Piper Perabo) dreams of making a name for herself as a singer and songwriter, so she moves to New York City in hopes of landing her big break. Needing to support herself until stardom rolls around, she takes a job as a barmaid at a new nightspot called Coyote Ugly, where the owner Lil (Maria Bello) and the staff of attractive young women dance on the bar, flirt with the mostly male clientele, sing along with the jukebox, and goad the customers into matching them shot for shot. Soon, local media pick up on the bar's success, turning the staff into unexpected celebrities, a situation that presents its own set of problems. Coyote Ugly also stars John Goodman as Violet's straight-laced father, Adam Garcia as a customer Violet becomes involved with, and Tyra Banks, Melanie Lynskey, Bridget Moynahan, and Izabella Miko as the barmaids; action-film titan Jerry Bruckheimer produced. ~ Mark Deming, Rovi

LeAnn Rimes
as Herself

John Fugelsang
as Richie the Bookie

Juliet Neil
as Girl on Street

Johnny Zander
as Roy the Busboy

Natasha Reulet
as Girl at the Surprise Party

Sarah Jane Morris
as Girl at the Surprise Party

Jennifer Day
as Girl at the Surprise Party

Nava Plotsky
as Girl at the Surprise Party

Alicia Sorell
as Girl at the Surprise Party

Jennifer Manalo
as Girl at the Surprise Party

It could be argued that the constant stream of self-mocking touches makes for a less manipulative experience... though it's doubtful whether anyone familiar with producer Bruckheimer's record would consider him a misunderstood satirist.

Does Jerry Bruckheimer have the same nagging feeling of deja vu as he compares each new screenplay to those that have gone before?

The bar in the movie is as unlikely a place as the strip joint in Flashdance, in which dancers staged elaborate costumed acts for beer-swilling, blue-collar patrons.

A movie that's the 'follow your dream' equivalent of singing karaoke along with a DVD of Flashdance.

More stuff and nonsense about making it in the Big Apple (seem slightly familiar?), Coyote Ugly rings to the sound of a desperate writer sweating to find a new spin on a clapped-out cliché.

The latest empty bauble to roll off the Bruckheimer assembly line.

The acting was terrible. Sometimes the actresses couldn't even act like they were friends...

Some sort of achievement in the ongoing oeuvre of Jerry Bruckheimer, Coyote Ugly is distastefully irresistible, a product that delivers more or less what it promises.

The cast fleshes out the cliches exuberantly and with little irony, which is something of a relief.

There were certain aspects that I loved.... It had to do with hot, sexy women dancing on a bar in a wet T-shirt contest.

One of those movies you secretly love, but don't own up to. Trashy and fun.

Coyote Ugly, brings a large group of beautiful women, and this is the charm to the picture, but this "thing" is terrible, depress anyone that like of good films and is an insult to all filmmaker and film critics. Totally cliche, the old and boring story of the small town girl going to achieve her dreams his a complete crap, what make me want never more see other American film or other made by McNally, Wendkos, Nathanson, Bruckheimer, Oman or anybody that was connected with this garbage. Without funny, a good direction or nice actings, the writers don't have a single drop of piety to his audience. Is a violent attack with scenes and more scenes of pure nonsense. Coyote Ugly, make with that the viewes leave the movies and make them want to puke. This feature-lenght, don't have at least a interesting story or a capacity to demonstrate a wish by the filmmakers of doing a nice work. A useless musical-romantic-drama-comedy, that make me lost 100 minutes. Unfortunately, the money use in this "thing" was thrown away, particularly in U.S., where the independent films struggle to have some money do achieve a few good movies. The rich producers spend his darling sweet cash in an unforgivable gibberish, as like we see in, Coyote Ugly. Terrible plot, screenplay, poor direction and weak actings, McNally's mistake, just like his movie career, is the total of a lot bad things in cinema history, and I just give half star, because I think that my review should stay in one of the first reviews and alert the reader to not lost his time with Coyote Ugly. Rotten, certain rotten.

An ok film, a lot of style and not a great deal of substance. It's far too predictable but kinda fun at the same time.