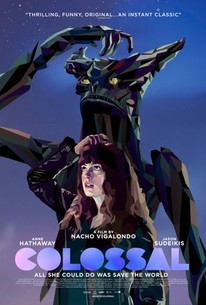 Critics Consensus: Colossal's singular strangeness can be disorienting, but viewers who hang on may find that its genre-defying execution -- and Anne Hathaway's performance -- is well worth the ride.

Critics Consensus: Colossal's singular strangeness can be disorienting, but viewers who hang on may find that its genre-defying execution -- and Anne Hathaway's performance -- is well worth the ride.

Critic Consensus: Colossal's singular strangeness can be disorienting, but viewers who hang on may find that its genre-defying execution -- and Anne Hathaway's performance -- is well worth the ride.

Gloria is an out-of-work party girl who, after getting kicked out of her apartment by her boyfriend, is forced to leave her life in New York and move back to her hometown. When news reports surface that a giant creature is destroying Seoul, South Korea, Gloria gradually comes to the realization that she is somehow connected to this far-off phenomenon. As events begin to spin out of control, Gloria must determine why her seemingly insignificant existence has such a colossal effect on the fate of the world.

Best Movies Off the Radar 2017
On DVD This Week: Going in Style, Big Little Lies, The Circle, and More
Rogue One, Mr. Robot Season 2, and More on Netflix and Amazon Prime This Week

It's a shame Raymond Carver is not around to watch this.

Surprisingly bland throughout but still manages to leave a sour taste.

She is supposed to be a self-pitying near alcoholic who can't take control of her own life. Hathaway, though, is such a strong screen presence that it's hard to believe in her as such a weak and needy type.

Clearly a movie designed for niche audiences, it will not strike everyone the same way. But for those who embrace Vigalondo's wild wavelength, the rewards are innumerable.

The genre mix doesn't feel organic, the changes in tone are abrupt and the message it's trying to convey is unclear. [Full review in Spanish]

The second half exceeds expectations, but does so in a way that you probably wouldn't foresee.

It's the more intimate and more vulnerable moments that I found most inspiring here, especially in the context of what could have easily been a dopey, escapist kaiju film.

[A] delightfully goofy and surprisingly dark rumination on interpersonal possessiveness and personal responsibility.

Colossal is a marvelous examination of interpersonal dysfunction, the kind of thing we have come to expect from indie films about middle America.

...if you're one of those people who complains that Hollywood keeps making the same movie, put your money where your mouth is. Go see Colossal.

The premise of a woman being connected to a kaiju on the other side of the world is so insane you gotta admire that someone went through with it. Unfortunately, there are so unexplained plot holes throughout the story unfolding, but Hathaway's charm makes up for it. There are some character developments that seem to come from out of nowhere and turn the rather light hearted comedy of the first half in a rather serious metaphor of abusive relationships later one. That feels odd. Still, overall pretty entertaining.

In a very interesting mix, there are two films here: one is typically sci-fi about a woman who discovers that she has a very strange power and two, at the same time she realizes a terribly humiliating weakness for abuse. It'll be for you to decide which of the stories carries more weight but I thought the resolution was socko. Nice too was the timeliness of the production given the headlines of the day. The cast delivers big time performances in this nuanced production. Why have the fans missed this???

It's about time another indie gem started to creep into a few theatres and become known. This is the time of the year when films released early in the year throughout film festivals will begin to find their audience. The most recent film I have discovered in that regard is a little movie called Colossal. If you are someone who likes thought-provoking material and find yourself constantly searching for something challenging to watch, feel free to continue reading my thoughts on Colossal, because I believe this film is for you. No film is perfect and there are quite a few "head-scratchers" throughout this film, but Colossal is a very solid effort nonetheless. Here is why I believe this film deserves more attention. Once it's discovered that a monster begins to appear and disappear in Seoul, the world becomes terrified, glued to their television screens. Discovering that she is actually the cause of this destruction some how or that she may even be linked to this entity in some way, Gloria decides to have a bit of fun with this terrible situation she has found herself in. Figuring out she's not the only one and having to cope with the fact that she is accidentally killing many innocent people, this Dramedy does not shy away from diving into some pretty deep and bizarre waters. Where I feel this film failed was in the use of the situation as a whole. Focussing much more on the romantic life of Gloria and how her actions are causing this horrific event, the film never fully explores this occurrence enough. I found myself wishing for so much more when all they were delivering was just enough to satisfy its very intriguing premise, which wasn't quite enough flavour in my opinion. There are many moments throughout this film that feel like an appetizer to a full course meal, only the full course meal never truly arrives until the final moments, not giving you enough time to let it sink in. Colossal is a very engaging film that never takes enough chances, slightly disappointing me with its conclusion. What I find oddly hilarious about Anne Hathaway being cast as Gloria here, is the fact that she has played this type of character so many times that it almost feels like perfect casting. That being said, she has never quite been in a film like this, so that aspect alone gave Colossal its unique feel. If people come out of this film saying they understood every second of it, they would most likely be lying to themselves, as there is clearly a little more to dig up upon multiple viewings. I can't say this is a film that demands multiple viewings, but I'll probably warrant it one or two more. I was sucked into this premise and found myself extremely curious of the conclusion. In the end, Colossal is a film that many people will be turned off by, but hardcore film fanatics may just love. For myself, there is a great film deep down, trying to escape from the body of an average one. I liked and disliked everything about Colossal, due to the fact that I felt they could've been exploring everything a little more. With a great idea, I felt it was played a little safe. Overall, this is a very well-made film from beginning to end. With solid writing, some very good characters, and a conclusion that is more than satisfying, as long as you go into this not hoping to be blown away, I believe you will have a great time. This little film deserves a lot more attention than the very minor splash it's currently making at the box office. If you have an open mind, check out Colossal.