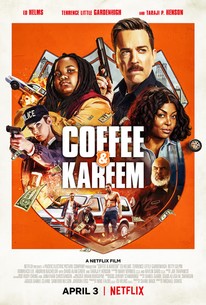 While police officer James Coffee (Ed Helms) enjoys his new relationship with Vanessa Manning (Taraji P. Henson), her beloved 12-year-old son Kareem (Terrence Little Gardenhigh) plots their break-up. Attempting to scare away his mom's boyfriend for good, Kareem tries to hire criminal fugitives to take him out but accidentally exposes a secret network of criminal activity, making his family its latest target. To protect Vanessa, Kareem teams up with Coffee - the partner he never wanted - for a dangerous chase across Detroit. From director Michael Dowse (Stuber, Goon), Coffee & Kareem is an action-comedy about forging unexpected bonds, one four-letter insult at a time. Co-starring Betty Gilpin, RonReaco Lee, Andrew Bachelor and David Alan Grier.

Things quickly escalate into chaos and stay there, but they do so in ways that are not quite funny enough to make you forget the implausibilities or the way serious stuff is played for bad jokes.

It's pungently offensive and bracingly violent, but this Detroit-set action comedy is also blessed with a sharp script by Shane Mack and a weirdly likeable central pair.

Coffee & Kareem is messy, but it's an interesting sort of gross chaos.

There just isn't much of a movie here, or even much of an homage movie when you compare it to its clear influences like 48 Hours and Lethal Weapon.

How was this movie really born from a pun? That's bold, and that's awful.

I got a few laughs in it...I'm caught between it scraping by, but just the premise alone was lazy and it feels like they made all this because of a pun...

Movies like Coffee & Kareem just leave you wishing that Netflix would choose to invest in more interesting and inventive projects instead of wasting its assets and its subscribers' time on such dismal dullness.

Unfortunately, Helms's schtick is painfully unfunny, much like that of his pint-sized co-star Terrence Little Gardenhigh, whose character's casual homophobia and dropping of f-bombs isn't cute just because he's supposed to be 12...

That's what drove me nuts about the new comedy Coffee & Kareem; there's genuinely funny stuff on the margins that kept getting pushed back by a tired central premise.

There are no featured reviews for Coffee & Kareem at this time.