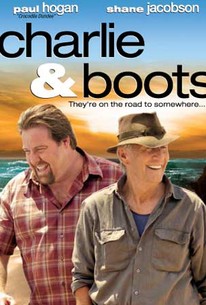 A man and his estranged father set out on a cross country fishing trip that helps them to reconnect while haling old family wounds in this affectionate comedy drama starring Paul Hogan. When Charlie's (Hogan) wife Grace dies of a stroke on their 45th wedding anniversary, the devastated widower grows consumed by grief. Though it's been years since Charlie has had any contact with his youngest son Boots (Shane Jacobson), a brief visit following Grace's funeral leaves Boots convinced that his ailing father is in desperate need of a good friend. Before long, Boots has convinced Charlie to go on a fishing trip. But the further the pair drives, the more obvious it becomes that Boots isn't just headed to their favorite fishing hole. When Charlie learns that Boots plans on taking them 3,000 miles to Cape York, he tries to make a break for it. Unfortunately for the old man, persistent Boots isn't about to let this opportunity slip by. Later, as the Australian countryside flashes by through their open windows, Charlie's grief begins to blow away, and his mischievous sense of humor begins to return. With the help of a pretty hitchhiker, the father and son start to learn just how important it is to accept their shortcomings and attempt to find a common ground. Later, after wild time at a rodeo, a hilarious encounter with a tough grandmother, and a frightful ride in an unstable plane, Charlie and Boots finally reach Cape York, and begin the first chapter in an exciting new adventure.

As to the humour, the script by Dean Murphy and Stewart Faichney is alarmingly slow, paunchy, dated, and sexist.

A road movie that offers a series of simple but singular pleasures, most of which stem from the way in which Charlie and Boots begin to relax in one another's company.

For some, the film will seem like a drive through an Oz theme park carrying a Father's Day message; others might appreciate its sentiments, but wish for more dramatic weight.

A tired and uninspired screenplay from the team behind the 2004 hit comedy Strange Bedfellows serves as the basis for a kerplunkingly bland, slightly cloying road movie.

With Dean Murphy offering pedestrian writing and direction, Charlie & Boots falls on the marketing power of its two lead players, neither of whom have anything of substance to offer.

It's a superbly relaxed and good-natured film.

Beautiful locations add texture to this heart-warming comedy that never fails to charm.

This is a delightful film. It's a perfect vehicle for Paul Hogan and Shane Jacobson.

David Stratton
At the Movies (Australia)

There are parts that are very funny, but this is less an outright comedy than a genial road trip that embraces not only the two travellers but some very typical Aussie folk along the way.

Margaret Pomeranz
At the Movies (Australia)

With so many Aussie movies going out of their way to be depressing, it's tempting to hope local filmmakers might lay off the doom and gloom. But here comes Charlie & Boots to remind us to be careful what we wish for.

The shrimp's not on the barbie but on the end of a fishing line ... the pairing of Hogan with Shane Jacobson is not as funny as that of Hogan and Michael Caton in Dean Murphy's earlier film

There are three main characters in this movie - Charlie McFarland (Paul Hogan), Boots (Shane Jacobson) and Australia - and they're all fantastic! Director/co-writer Dean Murphy succeeds in portraying typical Aussie characters that, no matter how colourful, don't come across as cardboard caricatures. There's so much heart in this comedy/drama that even the feel-good cliches that it throws at you from time to time seem charming. Most of the film's good-natured comedy comes from the interaction between the main characters, as well as cool cameos. But where Hogan and Jacobson really excel is at hitting all the right dramatic notes without ever falling into cheap melodrama. In the end, Charlie & Boots is a clever road movie that proves that family-friendly is not synonymous with Disney-dumb. It might not be the most original movie, but Charlie & Boots will surely plant a smile on your face - and who can complain about that?

Paul Hogan did everything right... but in this movie a lot from others is missing... few funny lines (mostly funny to Australians) good country music (and very cute performance of Morgan Griffin), a lot of cliche situations... and a director who has to learn a lot!