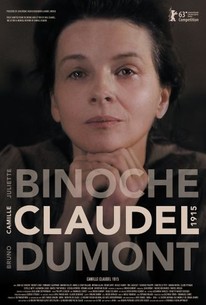 Juliette Binoche gives a mesmerizing performance as the brilliant sculptress, protégé of Auguste Rodin (and later his mistress), and sister of the Christian/mystic poet Paul Claudel - who, by 1915, was confined to a remote, church-run asylum for the mentally ill near Avignon. Bruno Dumont's rigorous, hypnotic portrait suggests that Camille's intense creativity and bohemian mores were on an inevitable, tragic collision course with her conventional Christian family and the expectations of early 20th century French society. Camille's paranoia (she believes Rodin is plotting against her) and occasional violent outbursts complicate her situation. Dumont peoples his film with real asylum patients, giving the film a disturbingly realistic dimension that adds to its poignancy. (c) Kino Lorber

Myriam Allain
as Patient in Retraints

Claire Peyrade
as Patient in Bath

This is a stark film, about the human condition at its most base and degraded.

This is a difficult film, but made with impressive formal rigour.

Throughout it all, Binoche's face shivers with emotions that Claudel herself cannot pin down.

It is a deeply sombre, deeply affecting film, based on real events, about the ordeal of Camille Claudel.

As non-plot becomes plot, so "shapelessness" finds its own shape. The film gathers mass, power and beauty as if unguided.

Dumont's commitment to tone and aesthetics is remorseless - this was an injustice, and you will suffer accordingly for 94 minutes. But it's not just suffering for suffering's sake.

The powerful evocation of a trapped soul rests entirely in the furrowed brow of Binoche... Camille Claudel is one of her most provocative performances yet.

Camille Claudel 1915 is the first Dumont film I would truly consider boring. Everything it works so hard to convince us of, we have heard so many times before.

With a stripped-down, bare-faced performance, Juliette Binoche is utterly wonderful in this tense French drama.

A powerhouse performance by Juliette Binoche provides the beating, tortured heart of this finely wrought and very affecting film about the later life of sculptor Camille Claudel.

This later history of Claudel, which stars Juliette Binoche, is spare, harsh and minimalistic, as one would expect from Bruno Dumont.

Binoche is excellent in a part that trades not on her beauty but her mind, portraying a woman whose talent made her dangerous in less enlightened times.

"Camille Claudel 1915" has a couple of great things going for it, like an excellent performance from Juliette Binoche in the title role of a woman who was at one time a lover and protege of Rodin and a sculptor in her own right, and a valid point about the state of mental health a hundred years ago, allowing a woman to be trapped in an asylum for decades against her will. That's especially hard to take considering she is much healthier than her fellow inmates and her brother Paul(Jean-Luc Vincent) has delusions of his own. But that's pretty much it and nowhere near enough, as Bruno Dumont does little more with the source material of letters and medical records than to simply transcribe them. Look, I know he has never made easy films to understand but at least in the past he has tried to challenge the audience instead of making a tedious movie like this one.