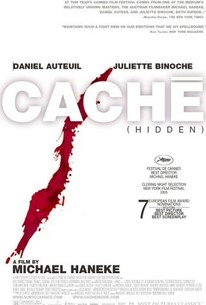 Critics Consensus: A creepy French psychological thriller that commands the audience's attention throughout.

Critics Consensus: A creepy French psychological thriller that commands the audience's attention throughout.

Critic Consensus: A creepy French psychological thriller that commands the audience's attention throughout.

Paranoia grips a bourgeois European family when a series of menacing videotapes begin turning up on their doorstep in Piano Teacher director Michael Haneke's dark drama. From the outside, Georges (Daniel Auteuil), Anne (Juliette Binoche), and son Pierrot (Lester Makedonsky) are the typical middle-class European family, but when a series of mysterious videotapes accompanied by morbid drawings reveal that someone has been monitoring their house, Georges begins to suspect that his past has come back to haunt him. It was during France's occupation of Algeria that Georges wronged a young Algerian boy named Majid (Maurice Bénichou), and as the enraged father and husband begins tracking down his former friend, the line between victim and predator becomes increasingly blurred.

Paule Dare
as The Orphanage Attendent

Hugo Flamigni
as George as a Child

Malik Nait Djoudi
as Majid as a Child

Diouc Koma
as Cyclist
View All

This French film (in bad, washed-out English subtitles) is a quiet chiller. A family's social fabric unravels right before our eyes.

Caché encourages us to look -- and then to look harder.

Contrarian that he is, Haneke does a much finer job forcing questions than providing an answer.

Haneke's patient, tip-toed assault turns Caché from a little movie about spooked haute-bourgeois media personalities into a sneaky and effective exposé on the artifice of film.

One thing that cannot be argued is Haneke's ability to attract the best actors in cinema, perhaps by promising to take them places they have never been.

This is a film you will be discussing for days, trying to figure out what actually happened and why.

Michael Haneke's sharp and timely thriller explores how the shadows of a man's past can come back to haunt him with a vengeance.

Hidden is essential viewing for those who like their thrillers with depth, intelligence, and inimitable style.

Coming from a guy who sliced private parts onscreen long before Lars von Trier, "Cache" is restrained. But Michael Haneke skillfully, slowly twists the knife on those who would so carelessly forget a decision that forever altered the life of someone else.

Many things are hidden in the layers of this brilliantly clever mystery from Michael Haneke: the truth, the point of view from which the story is told, the political references and, most intriguingly, the ending. Which is not to say you can't find them. B

Another step towards replacing facile jolts with compassionate scrutiny

Unresolved narratives are deal-breakers for many film viewers, and if you are one of them, this film will likely anger you greatly. For those willing to take on some heavy ambiguity, Haneke crafts a self-reflexive story about the relationship between film and memory, both good and bad.

A very well-acted, mysterious psychological thriller in which a family is terrorized by an anonymous stalker, who leaves violent drawings and video tapes consisting of following his victims around, at their doorstep. Director Michael Haneke inserts many of his calling cards here, such as prolonged scenes, a tense atmosphere, sudden acts of violence, and ultimately, an anti-ending. This formula works wonders yet again, as the viewer is never completely sure who to believe, as Haneke begins to slowly flip the script on his lead character (Daniel Auteuil) from likable to a figure who might indeed be hiding his guilt under his pride. The slow burn exercise he puts his viewers through ends on a cliffhanger, but one that is meant to encourage discussion instead of answer questions. Some will view it as boring and unrewarding, while, in my case, viewing this a second time, I was left in awe of how many questions Haneke was able to raise as a result. As far as performances go, Auteuil and Juliette Binoche are pitch-perfect, and they do a good job showing different sides to their characters. Ultimately, this is a film about an audience and how we view characters in films, and if this should be viewed as an "intrusion" or not.

The feeling of emptiness your heart receives in the end is close to unbearable.

The film opens with one of the more daring static shots you'll ever see, a couple of solid minutes of footage of the protagonists' house, and people coming and going, passing by, and - of course, this is Haneke - a moment where the tape is rewound to remind you that you are watching a movie. In come the voices of Daniel Auteuil and Juliette Binoche, who we learn are watching this tape that has been sent to them. Here begins the story, in which more mysterious packages arrrive, all seemingly with the goal of getting through the exterior of their happy, consumer-society life to reveal that which is... wait for it... hidden. By degrees, the film reveals more pieces from one character's past - who struggles with how much of it to tell to the other charcter - and it sets up misdirects along the way, too, before closing with a final shot that - were it not for the 20+-minute interview on with Haneke in the DVD's special features - I might have interpreted totally differently: there's an element that apparently, only half the viewers notice, and the interpretation of the film comes out differently as a result. Hard to go into much more detail with this film without ruining the intrigue, but suffice to say, it has all the calling cards of the classic psychological thriller, and that it's one of the more intellectually accomplished films you will see in the way that it succeeds in leaving everything open to interpretation, and questioning constantly what is in the open and what is... once more?... hidden. Fantastic film. This is my third Haneke (Funny Games; The White Ribbon), and I'm learning that I've really been missing out.