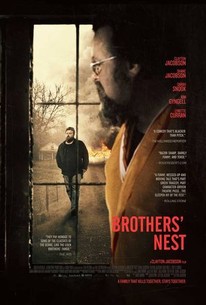 On a cold morning in the middle of country Victoria, two brothers arrive at the family home intent on murdering their stepfather Roger. Terry and Jeff's motive is simple--killing their step---dad will render their dying Mother's plan to change her will in his favor redundant. A staged "suicide" has been meticulously planned but there is one thing the boys didn't take into account, spending an entire day together. Old grudges, different worldviews and a general troubled history will pit these two brothers against each other. 'Brothers' Nest' is a tragic comedy about family, loyalty and murder--because after all "blood is thicker than water".

There's much to enjoy in this darkly comic update of Cain and Abel.

The Jacobsons have given us another comedy classic, far stranger than the last.

Brothers' Nest is reasonably satisfying as a film about the weird passions of family. It has a certain integrity as that, even if it's not a thigh-slapper.

Though brimming with pitch-black comedy, "Brothers' Nest" actually plays like more of an absurdist tragedy as it pits good brother against good-brother-gone-bad in a cautionary tale of longing and desperation that packs a surprisingly affecting punch.

All of it is razor-sharp, darkly funny, and tense.

This is a comedy that's blacker than pitch, and tethered enough to unexaggerated human behavior that it can really commit to the consequences of its characters' colossal stupidity.

They might not look it, being burly and impassive, but brothers Terry and Jeff (actual brothers Shane and Clayton Jacobson, who also directs) are desperate men.

Andiee Paviour
Nobody's Reading This But Me

Boasting a fantastic score by Richard Pleasance and his Pleasantville band, the film takes some time to build up, but the writing is effective, pointing out to a tough, unrelenting, and intense final part.

Brothers' Nest is a well made, nasty piece of work.

Reminiscent of the best of the Coens' work, Brothers' Nest is a future classic in the making.

Brother's Nest will make you laugh, hold tight to the armrest of your seat, and then cry with its tale of a dysfunctional family.

Thank God for Brothers' Nest, I was genuinely worried that 2018 didn't have anything great left to offer me. Australia has a pretty grim take when it comes to the "Dark Comedy" genre, and Brothers' Nest is absolutely no exception. But if you think of it as less of a comedy and more of a Crime Drama that you'll probably laugh in (and then maybe feel kinda bad), then you'll do well.