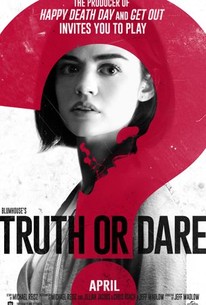 Critics Consensus: Truth or Dare's slick presentation isn't enough to make this mediocre horror outing much more frightening than an average round of the real-life game.

Critics Consensus: Truth or Dare's slick presentation isn't enough to make this mediocre horror outing much more frightening than an average round of the real-life game.

Critic Consensus: Truth or Dare's slick presentation isn't enough to make this mediocre horror outing much more frightening than an average round of the real-life game.

A harmless game of "Truth or Dare" among friends turns deadly when someone--or something--begins to punish those who tell a lie--or refuse the dare.

They die in fairly routine accidents that make you long for the slapstick ingenuity of the Final Destination franchise, still a high-water mark in teen-elimination films.

Those brief bits of digitally inserted spookiness are the only glints of interest in a plot that otherwise makes more Mexican border crossings (it's where the game starts) than an alarmist Trump speech.

The film's not so much a horror show as a soap opera with a high mortality rate.

Horror fans trust Blumhouse, so why waste the brand on a flick as lame as Truth or Dare?

It's mostly pants, with a haunted church that must have cost about $5 to assemble and a stinky performance from Teen Wolf cutie Tyler Posey.

Everything here...feels slotted into an existing template.

It might be amusing at points, but it's never thrilling or scary. It's just stupid instead.

Here's the truth from me: as dumb as this movie was, I kind of enjoyed it.

It's not good, but it's far from the worst.

Truth or Dare could have used a bit more intensity and blood to really make the stakes feel real. As it is, it feels tempered and edited so that younger viewers can buy tickets; it reeks of desperation, to be honest.

Given the cool concept, this really could have been something special, but instead it's just a shiny version of something we've seen countless times before.

The personalities of the central group actually describe Truth Or Dare itself quite accurately; bland, inoffensive, by-the-numbers, and mostly forgettable.

If you want to read the review I wrote for this, go to letterboxd.com/HankIsDead514. I can no longer post long reviews on here and I'm not writing two separate reviews for the same movie.

Blumhouse is a mixed bag of films, Truth or Dare is definitely on the bottom tier. The film never feels complete, you have that feeling the production was rushed on the concept alone, very common in this Capitalism world, executives meeting deadlines for bonuses. The biggest issue with the film is the depth of the characters and the villain, never receives a true explanation. The ending is baited for sequels, which I hope never see the light of day. Blumhouse had an impressive 2017 but 2018 has been quite shaky to say the least. I can't recommend this film, I thought it might have that Sinister or Insidious appeal but there is nothing here. Some of the character motivations are dull and the film is over without any real explanation. The filmmakers clearly hinged everything on the concept, it was playful but will never have that so bad it's fun vibe. This is a film that will vanish after viewing, just one of those poorly created horror films. 10/07/2018.

The sixth Final Destination movie I didn't really know I wanted. It's pure teen horror trash, but it's of the highest order of that genre and will forever remain a staple of the age in which it was born thanks to that ending. Something we don't get often enough these days when horror is often times more of an homage.