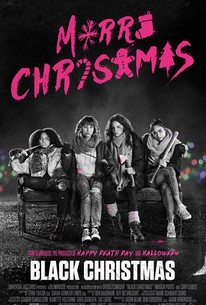 Critics Consensus: Better than the 2006 remake yet not as sharp as the original, this Black Christmas stabs at timely feminist themes but mostly hits on familiar pulp.

Critics Consensus: Better than the 2006 remake yet not as sharp as the original, this Black Christmas stabs at timely feminist themes but mostly hits on familiar pulp.

Critic Consensus: Better than the 2006 remake yet not as sharp as the original, this Black Christmas stabs at timely feminist themes but mostly hits on familiar pulp.

Hawthorne College is quieting down for the holidays. But as Riley Stone (Imogen Poots, Green Room) and her Mu Kappa Epsilon sisters--athlete Marty (Lily Donoghue, The CW's Jane the Virgin), rebel Kris (Aleyse Shannon, The CW's Charmed), and foodie Jesse (Brittany O'Grady, Fox's Star)--prepare to deck the halls with a series of seasonal parties, a black-masked stalker begins killing sorority women one by one. As the body count rises, Riley and her squad start to question whether they can trust any man, including Marty's beta-male boyfriend, Nate (Simon Mead, Same But Different: A True New Zealand Love Story), Riley's new crush Landon (Caleb Eberhardt, Amazon's Mozart in the Jungle) or even esteemed classics instructor Professor Gelson (Cary Elwes). Whoever the killer is, he's about to discover that this generation's young women aren't about to be anybody's victims.

Despite its desperate efforts to justify the homicides, there's nothing remotely innovative or even goofily satirical about it.

At its best, "Black Christmas" is a smart alternative to slasher horror, and Takal provides a needed voice in the current conversation. Her message is clear, but her execution needs some work.

It has plenty of ideas, but falls short in delivering the scares.

Takal and Wolfe distinguish their film with an in-your-face fury aimed at contemporary campus culture's negligent approach to sexual assault and the ways in which women are forced to deal in its aftermath.

Fans of the original ... might not love writer-director Sophia Takal's take, but Black Christmas is a fun film that gets its kicks out of literally smashing the patriarchy.

It's angry - righteously, deservedly, properly enraged about what one gender in particular has had to put up with for way too long.

For me, Black Christmas worked a treat. It was a joy to watch, even with its flaws (the poor sound design and lack of an impactful score in particular).

The film is an exquisite feast for the mind, it's not so much for the action or jump scares. Whatever you think about Black Christmas, you cannot deny its importance.

It means it ends up feeling like Sucker Punch without the dodgy visuals, or Cry Wolf sans the preppy uniforms and charismatic cast.

The entire finished product feels like it was just rushed out into theaters as quick as possible.

There's nothing clever about Black Christmas, and with an anemic PG-13 rating, even the horror parts do nothing to make anyone's dreams of a black Christmas come true.

The choice to go PG-13 on the gore and thrill level for this reboot makes it feel more like a TV movie than a feature film. Still, it was probably the right choice for the intended audience.

There are no featured reviews for Black Christmas at this time.